Ken Jones reports that Quantock Motor Services held their vintage running days over the Bank Holiday weekend and here is a picture of one of the vehicles on the service to Taunton. http://www.quantockmotorservices.co.uk/ 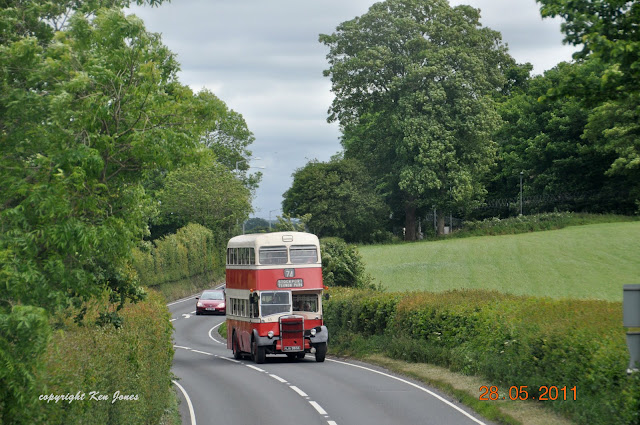 A guide featuring route, timetable, ticket and fare information to help passengers prepare for the new transport system was unveiled to the press today, ahead of being posted to all 160,000 households across Malta and Gozo, as Arriva puts the final preparations in place before starting operations on 3 July, 2011.
Keith Bastow, Managing Director of Arriva in Malta, said: "There have never been so many options to travel by bus around the Maltese Islands as there will be from 3 July, with a redesigned route network and increased frequencies, making travelling from A to B faster and more efficient.

"The team at Arriva is committed to giving the public all the support and assistance they may need to make the best use of the new bus system we are putting in place. With more routes, more frequent timings and the introduction of maximum waiting times, the transport reform is going to revolutionise the way the Maltese approach public transport."

New services including the Airport Express service will be introduced, enabling those needing to travel to and from the airport to do so from more locations, on larger buses with extra luggage space, more quickly on Express routes."
Mr Bastow unveiled the new colour coded bus route map for Malta and Gozo - a fold-away pocket copy of the map has been included in the information pack which householders will receive in the next few days. He also explained the new routes, including the concept of feeder routes which make it easier to travel between towns and villages directly without having to travel into Valletta. The feeder routes link with interchanges, which are bus stops which serve more than one route, where you can easily catch another bus to your next destination if you need to.

Arriva's John Rimmington, who has been involved with developing operational expertise for the transport project in Malta for two and a half years, explained how to use the different timetables, and showed samples of the typical timetables for Mainline routes, Feeder routes and the Airport Express routes, which will be available to download from the Arriva website from tomorrow. The timetables follow a tried and tested format which should be familiar to those who have used timetables abroad and will be on display at over 1,800 locations where bus stops have been erected. They will be also be downloadable as PDFs from the Arriva website - www.arriva.com.mt.

Talking about the ticket options, Mr Bastow said there would be a new range of tickets, with excellent value multi-journey tickets available, particularly for the 30 Day and 90 Day tickets available via the Arriva Saver card.

The Arriva Saver Card is available to regular bus users with an identity card issued by the Government of Malta, indicating that they reside in Malta or Gozo, and also students. The card is convenient and easy to use, enabling passengers to board quickly with no need to carry coins. It is easy to top up at ticket vending machines, Arriva Ticket Offices, online on Arriva's website and via the Customer Care Centre, costing only €26 for 30 days of travel or €72 for 90 days of travel. Once topped up, the user simply scans the card to the reader when they board the bus to activate it. A limited number are available before 3 July - to apply, those interested should download an application form and further information from the Arriva Malta website from tomorrow or call into a main branch of Malta Post.

The standard fares for Malta are €2.20 for the Two Hour ticket, €2.60 for the Day Ticket and €12 for the 7 Day ticket with a Night bus single fare costing €2.50. The discounted fares on offer for holders of an identity card issued by the Government of Malta, indicating they reside in Malta and Gozo, are €1.30 for a Two Hour ticket, €1.50 for a Day Ticket and €6.50 for a 7 Day ticket.

The standard fares for Gozo are €1.00 for the Two Hour ticket, €1.50 for the Day Ticket and €6.50 for the 7 Day ticket. Persons holding an identity card issued by the Government of Malta indicating that they reside in Gozo can buy a 30 Day Gozo ticket for €10.00.

Details were given on the various locations these are going to be available from including on the bus, through ticket vending machines, Arriva's ticket offices at Valletta, Victoria and the Airport, online on www.arriva.com.mt and from the Customer Care Call Centre. A penalty fare of €10 will be levied from those who fail to buy a ticket or are not able to show the correct travel ticket and any accompanying validation, such as showing  the relevant identity card issued by the Government of Malta.

"We are convinced that travelling by bus is the most cost-effective and environmentally-friendly option you can take," Mr Bastow said, pointing to the benefits of the new buses: Euro V engines with lower CO2 emissions, low floor for easy entry, space for luggage and wheelchairs/pushchairs, priority seating for mobility-impaired customers, air-conditioning, CCTV cameras and Real Time Passenger Information displays, including announcement of the next stop.

Mr Bastow also launched the new Customer Care Call Centre, which will start operating from tomorrow between 7 a.m. and 9 p.m. seven days a week. The number to call is 2122 2000. "Trained staff will take your calls and help you with any queries you may have about the new services and journeys you would like to make," Mr Bastow said. "After 3 July customers will be able to buy tickets through the Customer Care Call Centre, which will also be the channel used for making comments and complaints."

Arriva is also taking to the road to visit towns and villages in Malta and Gozo in June to meet with people, show them the new buses and talk people you through what the new services will mean for them. Mr Bastow said the company yesterday launched the Arriva Road Show, with a visit to the University of Malta, and another today at Mcast. On Sunday the Arriva team will be at Balluta Bay between 9 a.m. and 1 p.m.
Mr Bastow said, "The time has now come for the public to take their part of the deal and plan ahead so that they will be ready to use the new public transport services from 3 July."

The 7:10 from Ripley to Nottingham leaving Ripley. I will be catching the 10:15 departure because this one is twirly.
I caught the 10:15 to Nottingham and the 3:17 back. Both were bang on time and carried 25-30 pax to and from Nottingham. The pensioner in front of me remembered both the trolleybuses and the previous limited stop service. 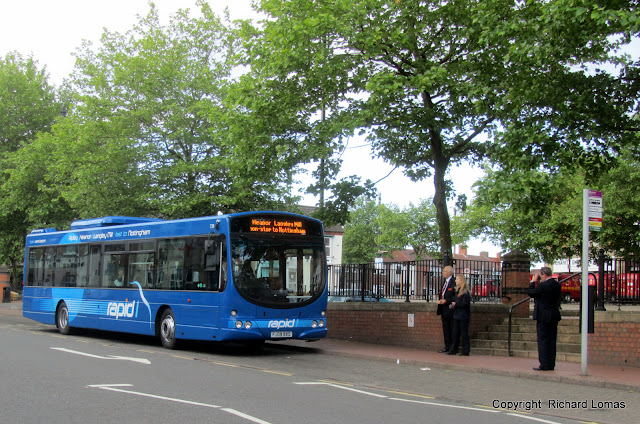 On Thursday Richard and Kath Lomas went to Buxton to get a few pictures of Bowers and trent barton buses before they are taken over by the new High Peak company later in the year.

by Ken Jones
What was it like on the open road at Whitsun Holiday before the onslaught of the motor car? I don't know - I'm too young - but today we were able to see what it was like when traffic in Somerset avoided the A358 and A361 and my camera so that a coach called "Island Queen" could bring back Bank Holidays and the Open Road. With a wave from the driver and a smile from the young hostess, the passengers can sit back and admire the view, without the traffic of today.

We were able to achieve this thanks to the following people:


Unfortunately to really capture the time gone by we needed to paint out the cycle lane and remove the modern lamp - posts but we didn't have enough visitors / volunteers to do this - perhaps next time.

Pictures of New Bus for London 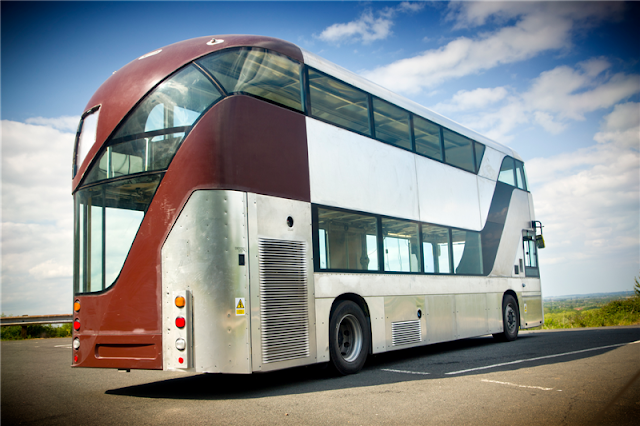 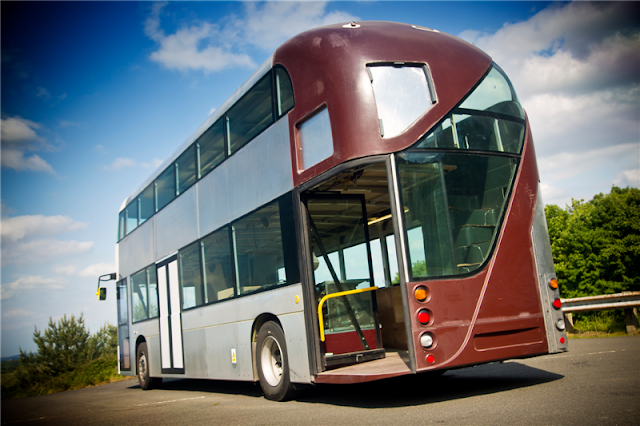 More on the New Bus for London (Borismaster)