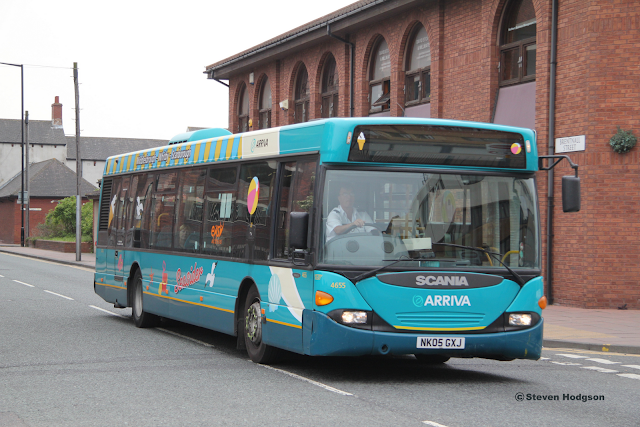 Our recent trip to Scarborough with National Holidays coincided with some poor weather – cool winds combined with little evidence of the sun. This, combined with the fact that our final day at the resort would be a 'free day' where we wouldn't be taken anywhere by coach, made me consider the possibility of returning home a day earlier. We were told that our rooms should be vacated by 10am on Friday morning but that the coach wouldn't depart from the hotel until 1pm and the thought of hanging around in Scarborough combined with arrival in Tyneside during the Friday evening rush hour convinced me that we should cut our holiday short and make our way home by public transport on the Thursday.
A visit to Scarborough railway station during our Wednesday evening stroll allowed me to check the train options which worked out at a reasonable £18 per person based on using 'First' trains only, departing Scarborough at 10.47 changing at York and arriving in Newcastle at 13.06. I was tempted to go for this and would need to book before 8pm to qualify for these fares, but I had also checked the bus times and found that we could make the journey for free, using our bus passes and decided to go for this option.
So on Thursday morning we strolled from our hotel, suitcase in tow and made our way to the bus stop outside Scarborough's station where we joined a worryingly long queue for the 9.40 'Seasider' service 93 bus to Middlesbrough. Other people in front of us had suitcases – would we get a seat and where would we stack our case?
The bus turned up a few minutes late, an Arriva North East Scania Omnicity Scania single deck saloon and we shuffled forward in the queue.
Fortunately there was room to stow the suitcase and we grabbed the last two available double seats close to the rear of the bus. Other passengers piled on and had to stand as we set off on the first part of the journey which took in the hilly route via Robin Hood's Bay before arriving in Whitby, which is where a lot of our fellow passengers were heading. I rarely choose to sit at the rear of buses as they can be unpleasantly noisy but the Scania wasn't too bad in this respect allowing pleasant conversation with fellow passengers.
The bus dropped off across from the railway station, then did a loop around the nearby roundabout before entering the bus station where the driver disappeared from his seat. In the meantime more passengers assembled at the stop, eventually boarding when the driver took charge again.

These Scanias seem to cope well with the undulating roads of North Yorkshire and the journey continued briskly through the impressive moorland scenery and we were soon passing through the outskirts of Guisborough, a little behind time. One of the passengers who had boarded from the stranded bus rang the bell to alight on the edge of town but this was ignored by the driver, so I assumed that maybe our long distance bus wasn't scheduled to stop at intermediate points. Not a good public relations exercise.
During the peak summer period an express X60 coach service runs to Scarborough with a journey time of three hours, although the start time of 9.15 and 9.25 from Newcastle and Gateshead respectively would I assume, preclude the use of a bus pass until the stop at Heworth Metro at 9.36.
The next stage of our journey was uneventful and we eventually arrived in Middlesbrough bus station at 11.55. I could see a Go North East X9 service waiting for the 12 noon departure to Newcastle, but we were ready for a toilet stop and we took the opportunity to stock up on food before strolling to the bus stand where we joined the queue for the 12.30 service to Newcastle. 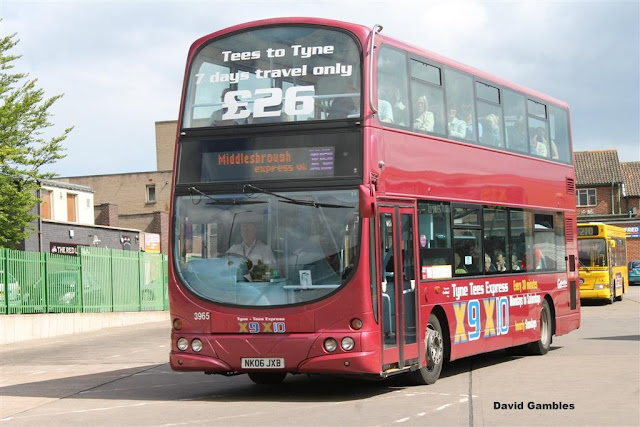 This arrived on time and we took our seats downstairs ready for the next stage of our journey. The large man with buzzing headphones then boarded and, yes, you've guessed, came and sat in front of us again so I decided we would sample the up-stairs of the Wright bodied Volvo!
This X10 journey is scheduled to run via Middlesbrough, (the X9 via Peterlee) and we set off a minute or so late on the journey to Newcastle. I noticed that many of the passengers on this service were of a younger age group and therefore would not be travelling on concessionary passes, Go North East have created a whole new market with this service, using smartly turned out Volvo B7TL Wright Eclipse Gemini's that cover the 45 miles in a time of one hour twenty minutes. 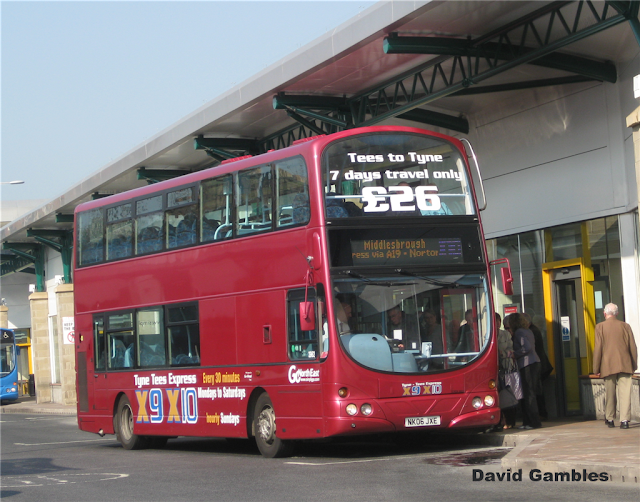 The journey was somewhat uneventful until we reached the outskirts of Tyneside where we noticed a massive fire in the distance and we drew closer we realised it was very close to the centre of Newcastle. 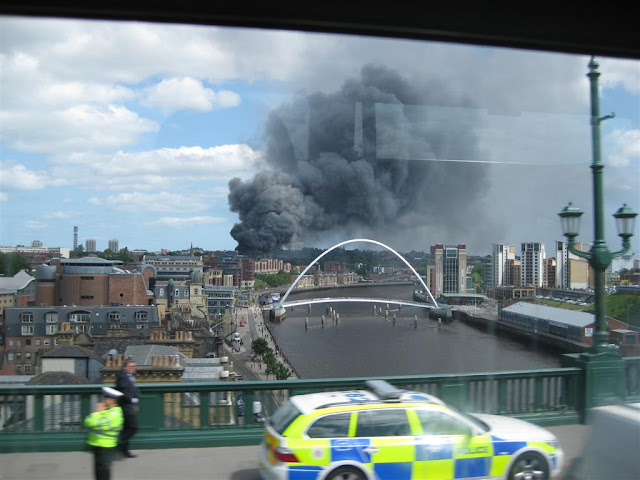 However it didn't impact on our journey as the wind was blowing the smoke west, along the side of the Tyne and we arrived at Eldon Square bus station at around 13.50. Our local Stagecoach service to Ponteland in Northumberland was just pulling in alongside making for an easy change of buses and we set off on the final leg of our 100 mile journey. 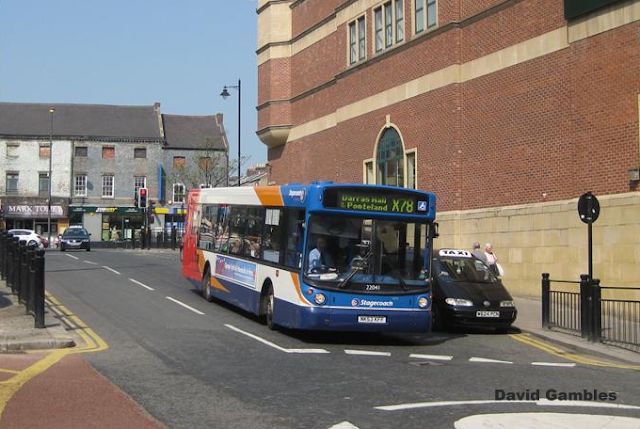 This was a perfect overall journey and a good example of how the concessionary pass has transformed bus travel, but has in turn, created overcrowding on some services. This is a problem that bus companies are not in a position to solve as they don't appear to being paid a realistic fee to carry the numbers of passengers now travelling. Overcrowding will in turn, put people off travelling that normally pay for their journey and the whole situation seems unsolvable. However it solved a problem for us and I would certainly make the journey again – maybe even taking time out to link it with the Scarborough to Hull or Leeds services, giving potential end to end journeys of 150 miles and 170 miles respectively!

Email ThisBlogThis!Share to TwitterShare to FacebookShare to Pinterest
Labels: Arriva, buses, Go-Ahead
Newer Post Older Post Home
The Focus Transport website is intended to appeal to those that have a broad interest in public transport.
We cover topical news items and display high quality photographs relating to the current transport scene and also show archive material from slides and prints that are relevant to the subjects under review.
We publish in-depth articles about transport issues and welcome contributions from anyone who has suitable material.