Newcastle to London in 2hrs 37mins 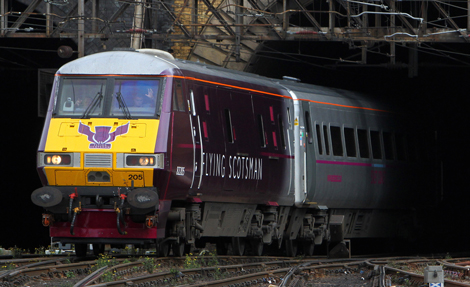 From David Gambles
This week has seen the introduction of the new East Coast Trains Flying Scotsman service which is scheduled to travel the 280 mile journey non stop between Newcastle and Kings Cross in a time of 2hrs 37mins.
The train departs Edinburgh Waverley each weekday at 05.40 stopping only at Newcastle and arriving in London King’s Cross at 09.40 just four hours after leaving the Scottish capital.
East Coast has named a locomotive “Flying Scotsman” to mark the revival of this historic service. It has branded the train the iconic Gill Sans font which was originally introduced by the London and North Eastern Railway (LNER) in the 1920s.

Recent evidence suggests that East Coast has been attracting more airline passengers to switch to its trains, particularly from Edinburgh and Newcastle.

Karen Boswell, East Coast Managing Director said “The Flying Scotsman, improved First Class offer and timetable will help us to continue to grow our market share against the airlines. They represent the biggest improvements to the East Coast route for a generation and will bring more seats, more services and many faster journeys for millions of customers".

The new timetable will also see the introduction of services seven days per week from London to Harrogate and London to Lincoln – for the first time in 20 years.