Just a few lines following a visit to the North Yorkshire Moors Railway on Friday 29th April - an escape from the wonderful events taking place in Westminster that day but the only day I was in the area for the start of the NYMR's 10 day Festival of Steam, celebrating the 175th Anniversary of the opening of the Pickering to Whitby Railway in May 1836, along which the NYMR now runs.
Alongside the railway's regular stable of locomotives a number of 'visitors' were in attendance and an impressive roster of services was operated along the line, including a recreation of the ubiquitous 'local' goods' which provided photo opportunities during its shuttles between Grosmont and Goathland Stations. The engine in charge of the freight was Standard Class 4 2-6-4 tank 80072, visiting from the Llangollen Railway and masquerading as sister loco '80116', as this was the number of one of the actual engines stabled at Whitby shed during the 1950s when first built. 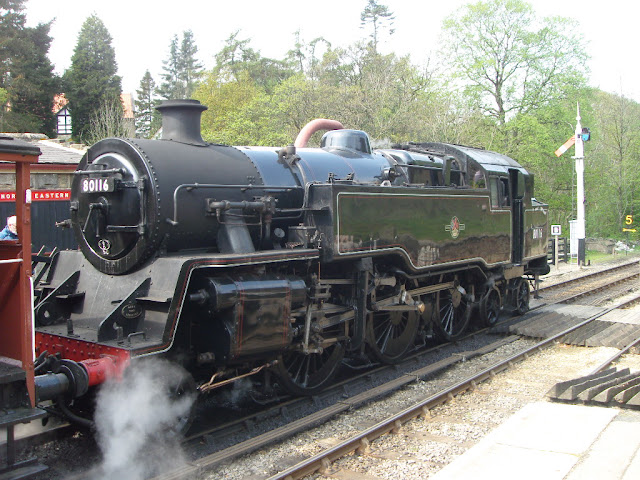 Making an impression were the NYMR's resident A4 Class Pacific 60007 'Sir Nigel Gresley', on her first outing at a special event since 2009 and now appearing in BR express blue livery. The last time I saw an A4 in steam would have been around 1960 at Doncaster when my aunt took me to the station to see the 'Flying Scotsman' thunder through, the A4 on that day making as much an impression as did 60007 on this. Pulling a rake of 1930s Gresley teak coaches, including a restaurant car, the A4 put up a respectable amount of 'clag' as she pulled away from Goathland on this occasion, the accompanying characteristic chime whistle evoking the East Coast expresses these engines were always associated with. 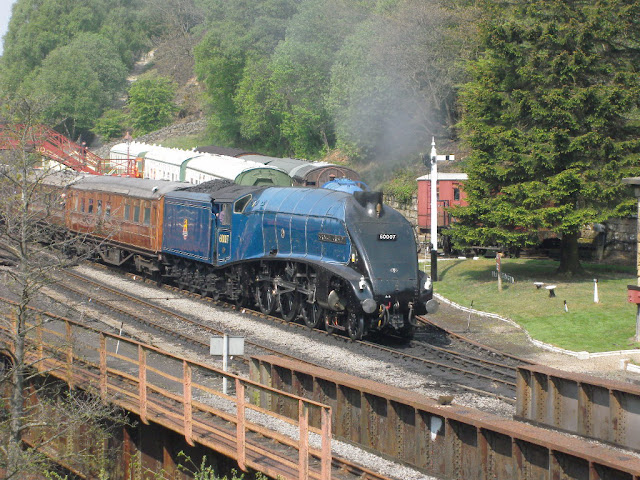 Another equally impressive sight, and sound, was the unique BR Standard class 8 4-6-2 Pacific, 71000 'Duke of Gloucester', behind which I traveled to Goathland from Pickering. A sharp shower earlier in the day had caused some delay to the loco's first outing with its seven coach train, due to slipping on some of the steep gradients up to Goathland from Grosmont which proved problematic even for this engine's power. Some judicious and enthusiastic use of the sandboxes aided progress however and, thankfully the sun shone for the remainder of the day and no further problems were encountered. 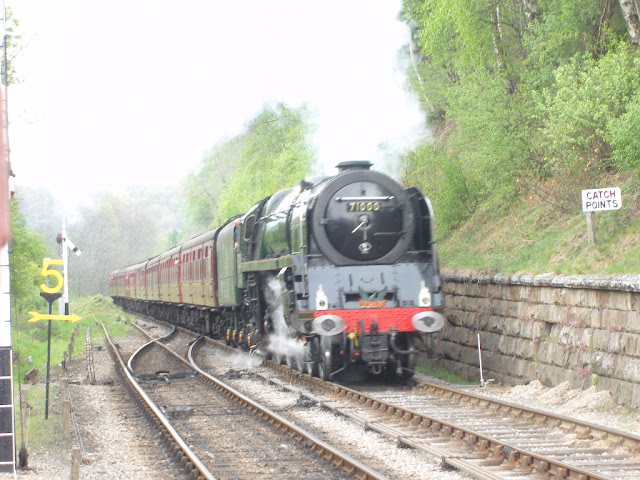 Further variety was provided by resident BR standard class 9f 2-10-0 92210, in black livery and now named 'Cock-o-the -North'. These powerful engines were synonymous with the North-east, being used in their heyday on the area's heavy coal and limestone trains for the steel industry but, as seen here, they also served on express passenger services at times. 92210 came to the NYMR in 2010 after restoration at the Midland Railway Centre at Butterley and is now owned by a consortium based in the North-east. On this occasion 92210 appropriately sported Union Jack decorations on the front buffer beam in honour of the day's Royal nuptials in London. 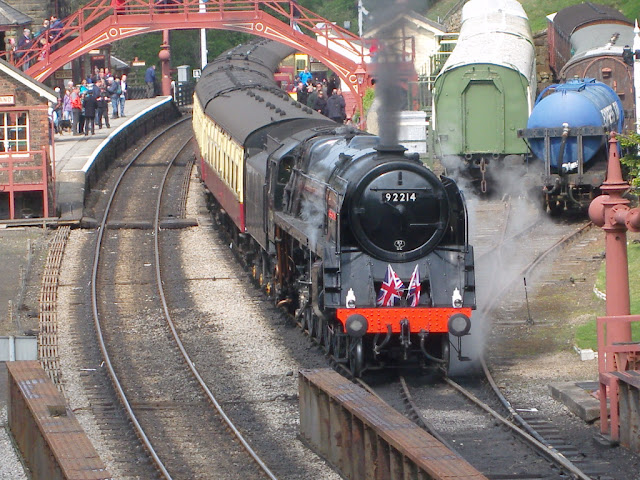 More 'mundane' power came in the form of three Stanier 'Black 5' 4-6-0 types, one of which, 45407, named 'The Lancashire Fusilier' was visiting from the East Lancs Railway. Apart from operating one of the line's normal scheduled services to Whitby, 45407 was seen later in the day banking the rear of a train headed tender first by privately owned visiting Black 5 44871, while Standard Class 4MT 2-6-0 76084 provided even more variety.
Unfortunately the promised steamings of the replicas 'Rocket' and 'Planet', representing the very earliest of locomotive types to operate on the line, were not due until the following day so were not seen on my visit. The day however provided a wonderful opportunity to see powerful and iconic steam engines at their best, working hard on some punishing gradients and running a very busy, and well organised, roster of services.