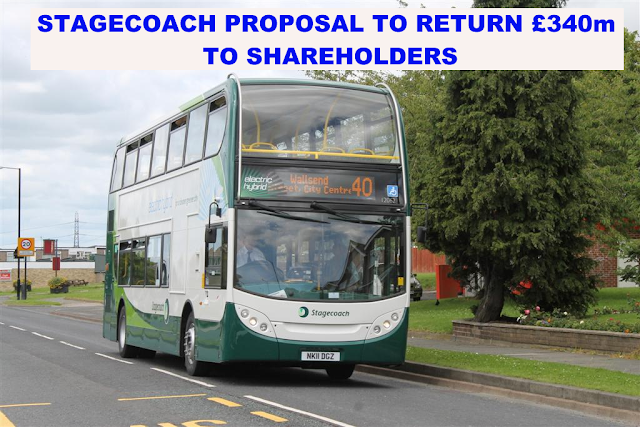 As widely expected, Stagecoach have today, announced a return of capital to shareholders amounting to 47p per share.
In the statement issued by the group they state that " By 30 April 2011, the Group's consolidated net debt had reduced to £281m while the Group's profit (excluding intangible asset expenses and exceptional items) had increased.  The reduction in net debt reflects the Group's strong cash generation over the period.  This led the board of directors of the Company (the "Board") to review the Group's capital structure and the Board has concluded that it is appropriate to return approximately £340m to shareholders."
The Return of Cash (together with certain other matters) requires the approval of shareholders. These approvals will be sought at a general meeting of the Company, which is expected to be held at the Company's registered office at 10 Dunkeld Road, Perth, PH1 5TW at 9.30 a.m. on 7 October 2011.
The Group's last major return of cash to shareholders was in 2007 when it returned approximately £700m.
Also stated in the announcement is that  "The Board has taken full account of the Group's development plans and access to funding in reaching its decision that this was an appropriate amount to return to shareholders."
As at 15.45 today (19th August) shares had risen by 10p to a price of £2.43 per share.

Email ThisBlogThis!Share to TwitterShare to FacebookShare to Pinterest
Labels: Stagecoach
Newer Post Older Post Home
The Focus Transport website is intended to appeal to those that have a broad interest in public transport.
We cover topical news items and display high quality photographs relating to the current transport scene and also show archive material from slides and prints that are relevant to the subjects under review.
We publish in-depth articles about transport issues and welcome contributions from anyone who has suitable material.