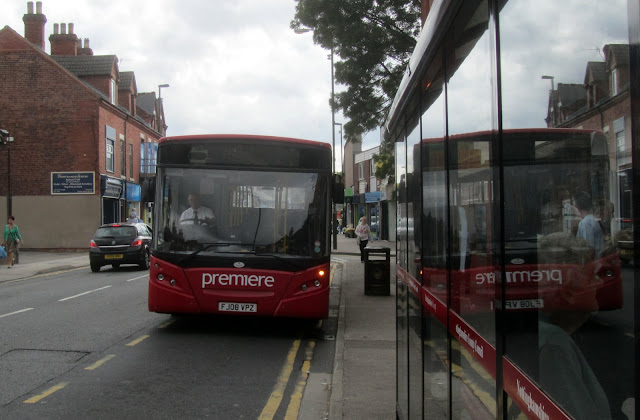 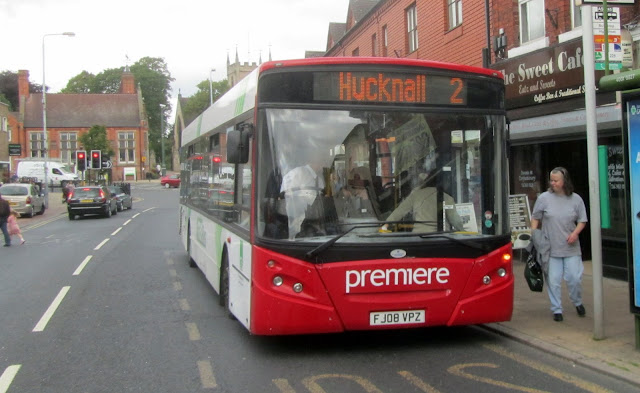 Yesterday we had a ride on Premiere's new service 2 from Eastwood to Hucknall which is partially funded by the European Regional Development Fund. We were the only passengers leaving Eastwood but in total it carried 15 (11 pass holders and 4 paying customers) which was more than I expected.
The bus left Eastwood 4 minutes late and was 6 mins late arriving in Selston where it took a wrong turn and had to reverse at Church Lane/Stoney Lane where the driver had difficulty in finding reverse. At the next stop the driver couldn't change a £20 note causing another delay whilst the lady borrowed money from her friend. We left Selston 8 minutes late but negotiated Sherwood Business Park very quickly on a Saturday morning leaving 2 minutes late and arriving in Hucknall 1 minute early at half past the hour.
The next Rainbow 3 to Nottingham Victoria was due in 2 minutes from the same stop but this was 6 minutes late.

I also picked up a timetable for the new Red8 service to Nottingham. The terminus will be in Milton Street which is nearer the city centre than Victoria bus station and there will be 'special launch offer cash fares' of £1 single and 7 days unlimited travel for £5.
Richard Lomas

Email ThisBlogThis!Share to TwitterShare to FacebookShare to Pinterest
Labels: buses, Nottinghamshire
Newer Post Older Post Home
The Focus Transport website is intended to appeal to those that have a broad interest in public transport.
We cover topical news items and display high quality photographs relating to the current transport scene and also show archive material from slides and prints that are relevant to the subjects under review.
We publish in-depth articles about transport issues and welcome contributions from anyone who has suitable material.