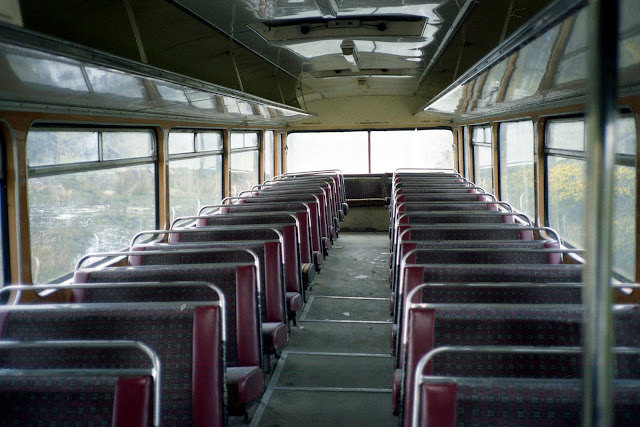 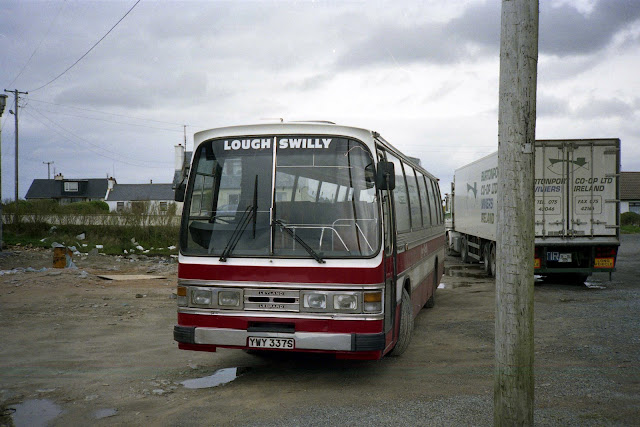 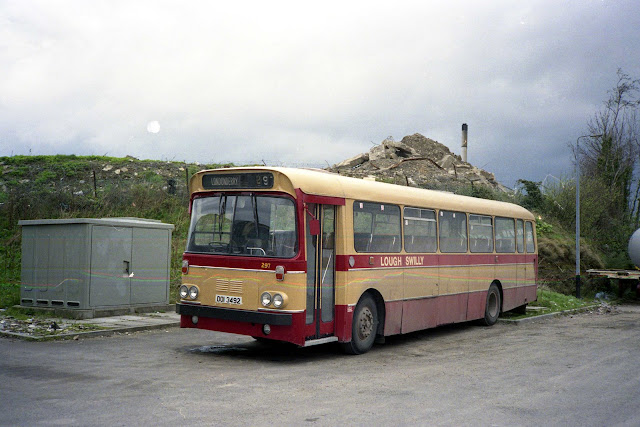 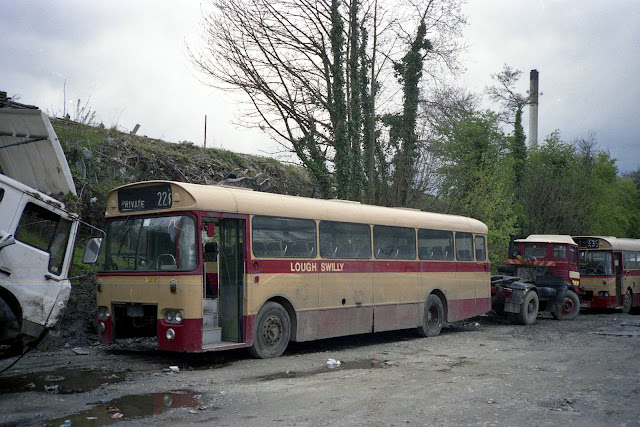 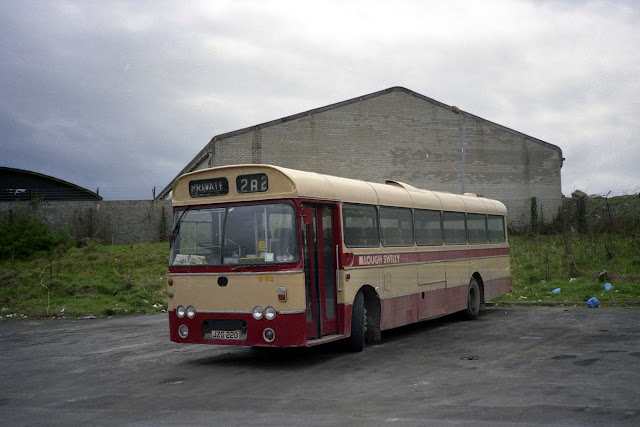 Sheffield's 21 newly introduced ADL Enviro 400 Hybrids are getting press coverage this week. Stagecoach are operating them on service 120, which travels through Fulwood, Ranmoor, Broomhill, the city centre, Manor Top, Frecheville, Waterthorpe and Halfway. An official launch is planned for Thursday which will take place in Sheffield city centre.
The extra costs of purchasing the hybrids compared to conventional buses were covered by a Green Bus Funding Grant
http://www.bbc.co.uk/news/uk-england-south-yorkshire-15073871
Keep checking our FocusFlickr site to see more pictures of the new hybrids in action in Sheffield.

Richard
I see that Stelios is set to return to the transport business with
FastJet. Can we expect to see a future FastBus operation?
http://www.bbc.co.uk/news/business-15066268
TW

Ken fires a broadside at Boris in the opening rounds of the battle to be the Mayor of London at the next election.

An amazing trek set off from London this morning on an epic round the world journey.
Their website http://tadpolesroundtheworld.com/
TW

Battery or Flywheel Hybrid - The Future?

An Optare Solo EV battery powered bus has entered service at Heathrow Airport where it operates between Terminal 5 and BA Headquarters at Waterside. This is the first electric powered bus to operate at Heathrow where the 25 seater is scheduled to travel between 50 and 60 miles each day.
The Solo EV is in use at various locations in the UK, amongst them is Durham, where three vehicles were acquired for the short service linking the Railway station & Coach Park with the Cathedral.
Unfortunately the Solos are struggling to achieve the daily mileage required of them and when I visited Durham just over a week ago only one vehicle was in service. One has been returned to Optare and the other vehicle was out of service. A back up diesel powered Solo was sharing the service with the one active Solo EV.
Clearly technology needs to move on before this type of vehicle can be relied upon and on that basis a company called Torotrack has developed a Flywheel Hybrid drive system which is being tested in an Optare Solo. The system uses a Ricardo Kinergy flywheel, which can run at 60,000 revs per minute, to store energy produced from braking. The flywheel is combined with a Torotrack continuously variable transmission system to transfer energy to the road wheels. Initial costings suggest that the system could be available for a fraction of the coast of current hybrid systems and would provide fuel savings of up to 10%.

Flywheel propulsion isn't new to the UK, with two Parry People Movers railcars, which use flywheel technology, having been in service since 2009 on the Network Rail Stourbridge Branch. They have achieved 99.5% reliability and during 2010 they operated almost 70,000 services carrying 465,000 passengers.

From a reliable source:
'I can now confirm that Hulleys new decker is a V registered Volvo B7L with Alexander ALX 400 bodywork, believed to be from First in London, though i'm not sure of the exact registration yet.
It is being painted by Volvo who hope to have it on their stand at Coach and Bus live at the NEC on the 8th October and having seen a photoshop mock up of it I think it will look very smart.'

A few buses and electric bicycles in Mulhouse 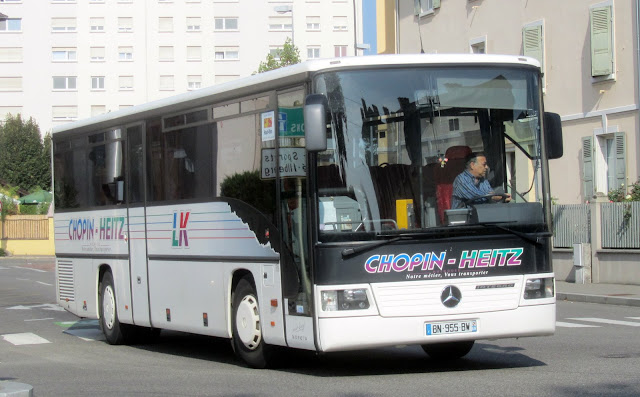 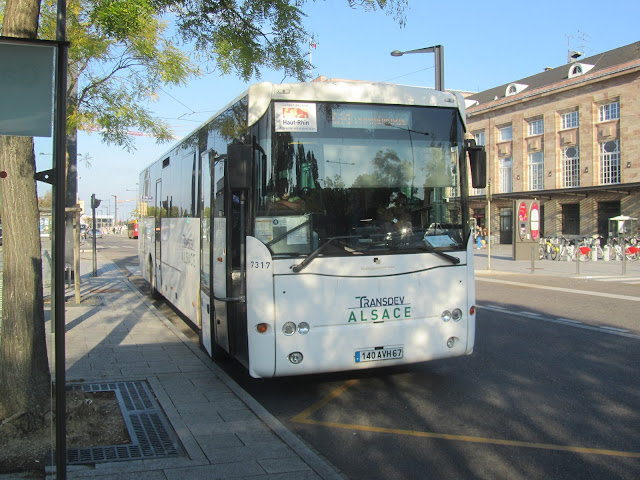 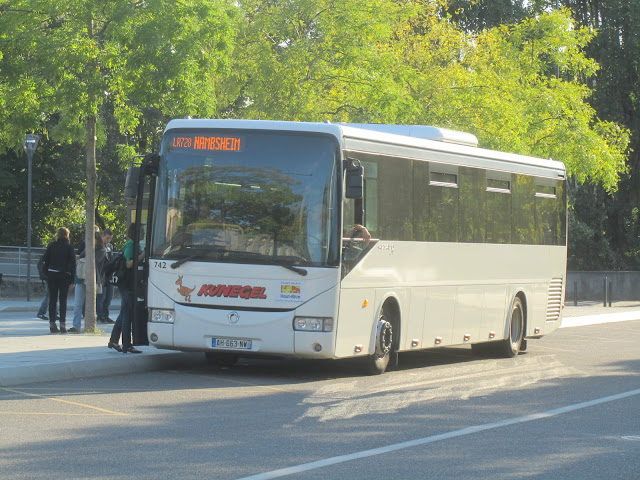 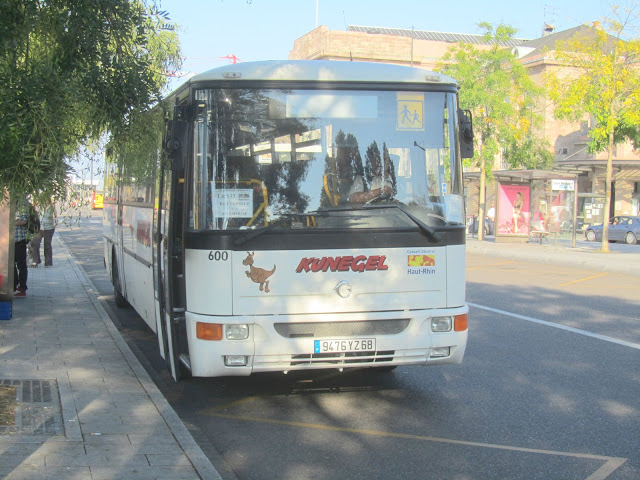 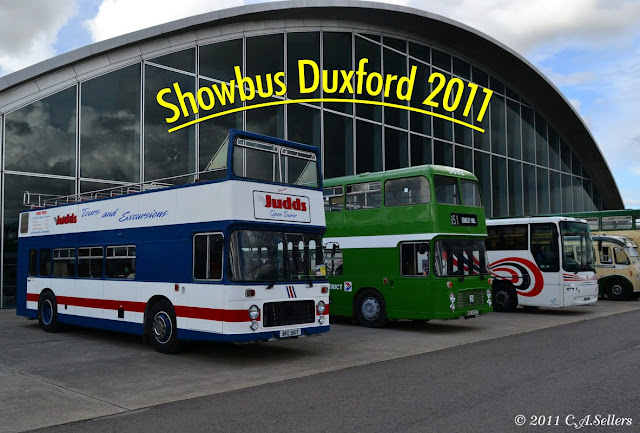 Colin Sellers visited Duxford at the weekend and will be posting his photos on our FocusFlickr site. Keep checking on http://www.flickr.com/photos/focus_on_flickr/
Also recently posted are pictures from Meadowhall and from a trip to the North East

A few French buses in Strasbourg 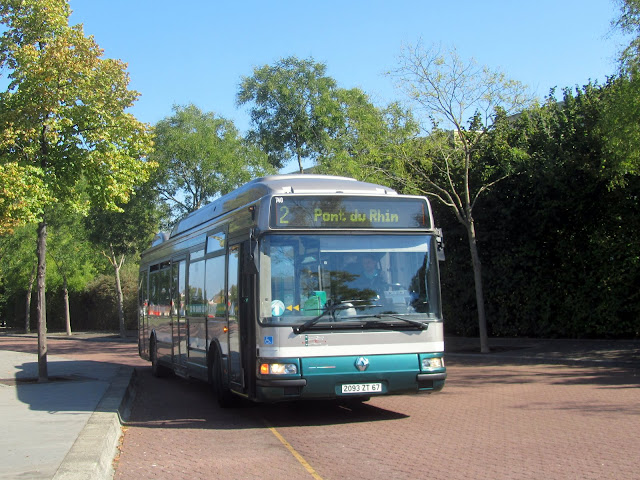 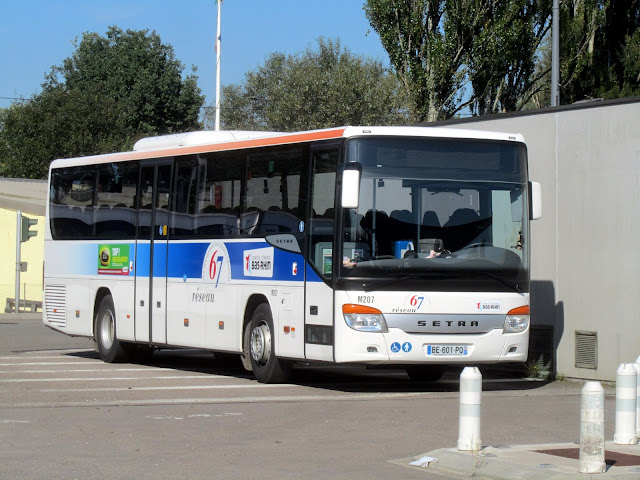 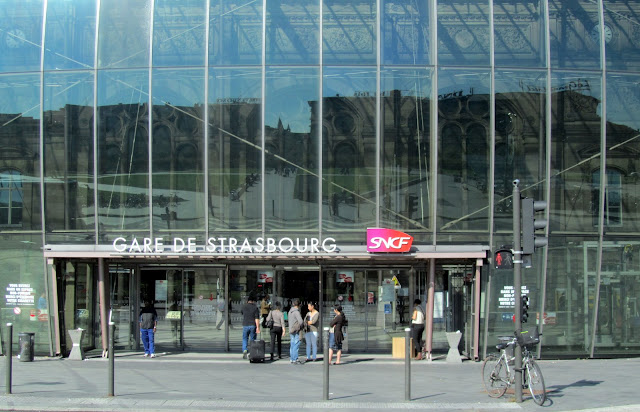 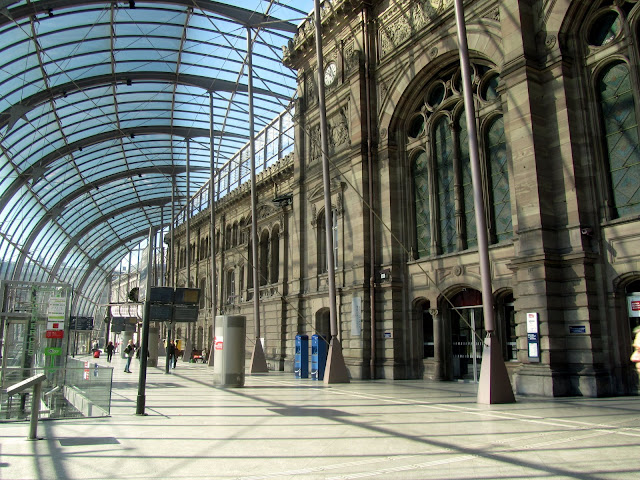 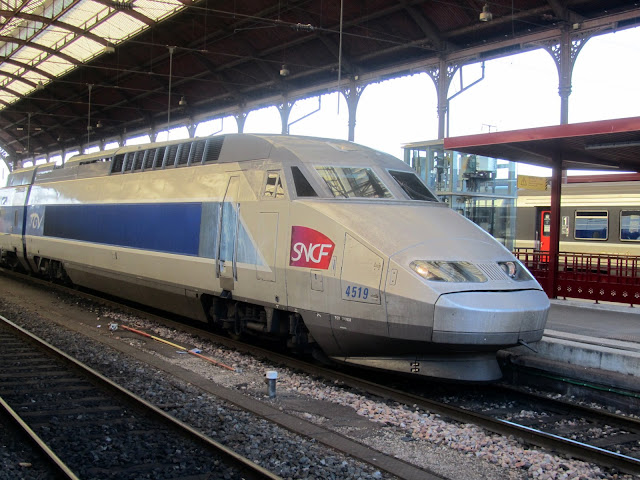 CKP Railways plc has made an application in the second round of the Regional Growth Fund for a grant towards the eventual re-opening of the Keswick to Penrith Railway. http://www.keswickrailway.com/index.html
Funding is sought to get through the next legal and development stages, then hopefully begin work on the ground.
According to the CKP website "The application seeks funding to build on the technical and environmental work paid for by our supporters so far"
About £400,000 has been raised to date
The line only closed in 1972 and most of the earthworks and bridges are still in place. In the few areas where the line has been blocked by development, plans have been drawn up for re-alignment of the track, which in each case appears to be quite feasable.  http://www.keswickrailway.com/id36.html
Keswick Station has survived almost intact and is a constant reminder of when the line was active. 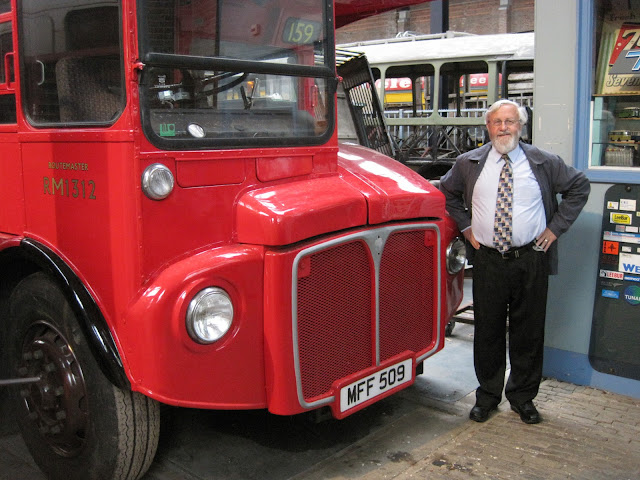 Will Designlines Ever Run Again?

The ten Designline electric buses are still stored out of use at the Stagecoach Walker Gate depot and it is rumored that the batteries are no longer being charged. The hybrid vehicles were bought six years ago by Newcastle and Gateshead Councils and Nexus (Tyne & Wear PTE) to run on the prestigious Quayside routes, but the buses soon gained a reputation for unreliability as the batteries were unable to cope with the steep roads leading to the riverside on both the Newcastle and Gateshead sides of the Tyne. The hybrid buses were fitted with high speed turbine motors which seemed incapable of re-charging the batteries quickly enough to keep the vehicles running and it was not unusual for at least three or four of the buses to be replaced in service each day by conventional diesel buses, usually step entrance Dennis Darts.
Stagecoach operated them as part of their five year Quayside contract but wisely never owned them and when the contract came up for renewal Go North East won the tender for next five years, based on using brand new Optare Versas. Stagecoach were asked to find a use for the Designlines and tried them briefly on their 18 route but the unreliable nature of the buses saw them abandoned at various points of the route due to low battery problems and the route returned to operation by conventional buses.
Now the batteries are not being charged there is little chance of them ever returning to service and they are  a reminder of how the road to find a reliable method of electric propulsion for buses is littered with failures.
It is pleasing to see the latest generation of hybrid vehicles in daily use in Newcastle without exhibiting such problems and it is to be hoped that battery life won't turn out to be an issue for these later generation vehicles.

These two pictures were taken at the Black Country Museum on Tuesday. Trolleybuses have not operated this year because of damage to the overhead line but plans to rectify this are in hand. There are currently 4 trolleybuses at the museum: 2 from Wolverhampton, 1 from Walsall and 1 from Bradford. 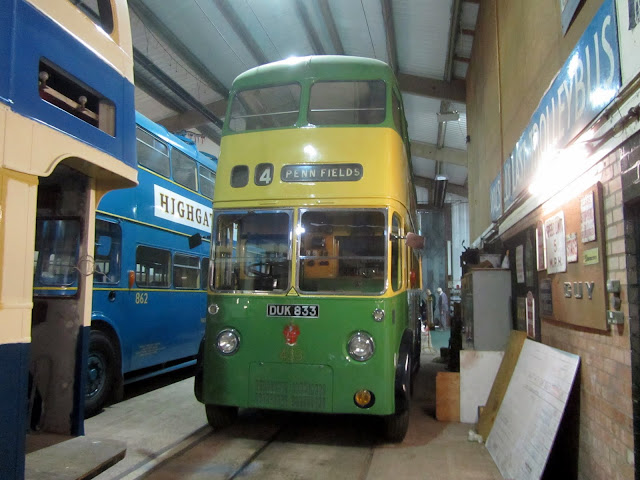 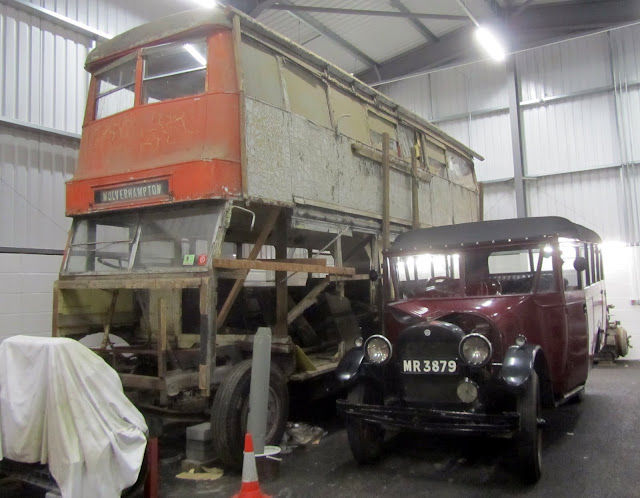 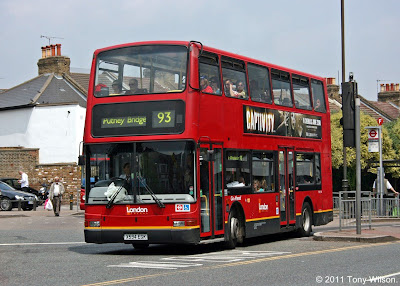 East Yorkshire Motor Services are allegedly in the process of acquiring five former London Central Volvo B7TL/Plaxton President low-floor double-deckers. In their sights are PVL 179/83/91/3/4 in the London company, which EYMS intend to number 881-885 in that order. One such vehicle PVL 194 is illustrated in London service. It appears that their destiny is to lose their lids and become open-topped to replace the current step entrance double-deckers at Scarborough on the seafront service.

Incidentally as an aside the other Scarborough seafront operator Seaside Suncruisers, have apparently acquired two former London United Volvo B7TL double-deckers. However, the bodywork is unknown at present, but would be either Alexander ALX400 or Plaxton President version.
TW 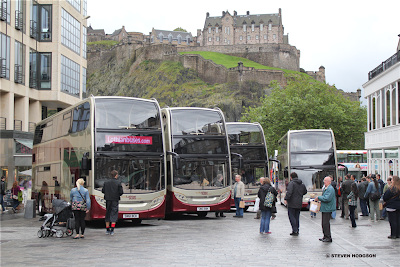 Lothian Transport launched their new Hybrid buses on 10th September on Castle Street, Edinburgh. The event was visited by over 3000 passers-by who were eager to find out more about the new vehicles.
The 15 Enviro 400H buses have been purchased with help from the Scottish Government's Green Bus Fund and are manufactured by Alexander Dennis in Falkirk.
http://lothianbuses.com/more-info/hybrid-buses.html 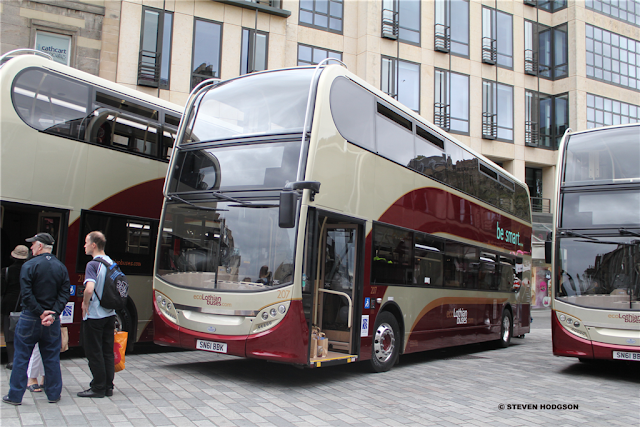 The Enviro 400H is fast becoming the market leader in the UK. During July, Stagecoach North East launched the first of their 26 Enviro 400H vehicles at a ceremony at Newcastle's Quayside. Now all 26 buses are in service and are said to be offering good fuel savings when compared to conventional buses.
The Enviro 400H is powered by a BAE Systems HybriDrive unit combined with a Cummins 4.5 litre ISBe4, Euro4 diesel engine developing 138kW (185 bhp) . It has an unladen weight of 11,590 Kg and a gross vehicle weight of 17,800kg.

Email ThisBlogThis!Share to TwitterShare to FacebookShare to Pinterest
Labels: buses
Newer Posts Older Posts Home
Subscribe to: Posts (Atom)
The Focus Transport website is intended to appeal to those that have a broad interest in public transport.
We cover topical news items and display high quality photographs relating to the current transport scene and also show archive material from slides and prints that are relevant to the subjects under review.
We publish in-depth articles about transport issues and welcome contributions from anyone who has suitable material.