A special meeting of Edinburgh City Council has voted in favour of building the tram line from Edinburgh Airport to St Andrew Square, overturning a decision last Thursday to go only as far as Haymarket on the western side of town
However fears that the cost of Edinburgh’s tram project could continue to rise beyond its current budget of £776 million were voiced yesterday as councillors reinstated a decision to complete a truncated route as far as the city centre. 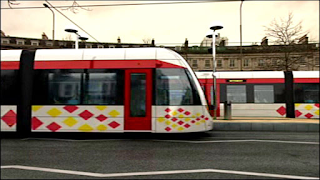 On Tuesday, finance secretary John Swinney announced the remaining £72m of a £500m grant would be withdrawn because there had been "fundamental changes" to the original plans.
Contractors Bilfinger Berger also warned that the shorter route would cost more than the City of Edinburgh Council estimate of £700m.
David Gambles

Email ThisBlogThis!Share to TwitterShare to FacebookShare to Pinterest
Labels: trams