The first of Blackpool's new fleet of trams has been unveiled.
The Bombardier Flexity 2 light rail vehicles are part of a £100m upgrade of the famous Lancashire tramway, running between Blackpool and Fleetwood. 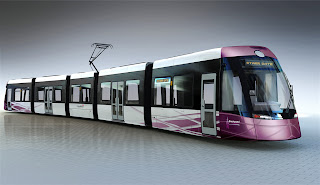 As well as 16 new trams, a new depot has been built at Starr Gate.
The new trams which have improved access for passengers and touch screens for the drivers, will run alongside the resort's heritage trams.
Four million people use the trams annually and the new vehicles will start being used from Easter 2012.
Blackpool has the UK's longest-running tram operation, which last year celebrated its 125th year of operation.
The vehicles are being built in Germany and Austria and will be delivered over the next few months, after training they should be operating from around Easter next year."
Each vehicle will be about 32m long and 2.65m wide, with five sections. The trams can carry about 74 seated passengers, with room for wheelchairs and pushchairs.
Following Bombardier's contract success in Lancashire, the Queensland Government in Australia has also ordered 14 of the same trams for its Gold Coast Rapid Transit system.
http://www.railnews.co.uk/news/metro/2011/09/08-blackpool-hosts-global-launch-for.html

Pictures of the launch including dancing girls.
--
David Gambles

Email ThisBlogThis!Share to TwitterShare to FacebookShare to Pinterest
Labels: trams
Newer Post Older Post Home
The Focus Transport website is intended to appeal to those that have a broad interest in public transport.
We cover topical news items and display high quality photographs relating to the current transport scene and also show archive material from slides and prints that are relevant to the subjects under review.
We publish in-depth articles about transport issues and welcome contributions from anyone who has suitable material.