Comings and Goings in Derbyshire

From Sunday 2nd October Veolia Monday only service D1 and and Friday only D5 have been taken over by Centrebus. These are in effect day excursions departing from Nottingham at 09:35 to Bakewell and Chesterfield respectively. Both services will be withdrawn from 20th November. (Centrebus have also taken over most of Veolia's Leicestershire services including Nottingham - Melton Mowbray - Peterborough.)

Further reductions are being made to evening and Sunday tendered services from Sunday 30th October. Details of these and other changes here.
trent barton will no longer be operating on services 17 (Matlock - Chesterfield) or 140 (Matlock - Alfreton - Ripley) on Sundays. The evening 17 journeys are being withdrawn so that all services will be operated by Stagecoach and the 140 will be operated by TM Travel.
Weekday service 99 (Alfreton - Sutton) operated by Doyles will be withdrawn.
Hulleys service 175 (Bakewell - Eyam) and TM Travel's 241 (Sheffield - Bakewell/Castleton) are being replaced by a new service 275 which requires a double decker at school times.
Service 214 (Sheffield - Matlock - Wirksworth) has been retained by TM Travel but will only operate between Sheffield and Matlock.
TM Travel daily service 218 (Sheffield - Bakewell - Buxton) with connections in Buxton for Hanley will only operate on weekdays and only between Sheffield and Bakewell. This is shown as a commercial service. A Sunday service between Bakewell and Sheffield will be provided by a revised tendered service 215 (Sheffield - Bakewell - Matlock).
Finally the Ripley local service 147 currently operated by Doyles is being taken over by TM Travel. 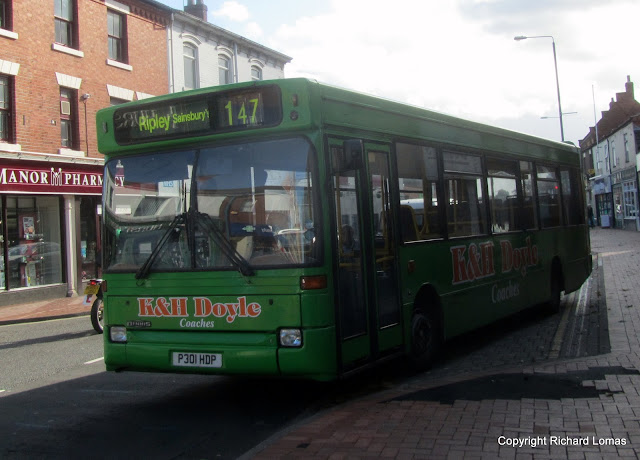 Email ThisBlogThis!Share to TwitterShare to FacebookShare to Pinterest
Labels: buses, Derbyshire
Newer Post Older Post Home
The Focus Transport website is intended to appeal to those that have a broad interest in public transport.
We cover topical news items and display high quality photographs relating to the current transport scene and also show archive material from slides and prints that are relevant to the subjects under review.
We publish in-depth articles about transport issues and welcome contributions from anyone who has suitable material.