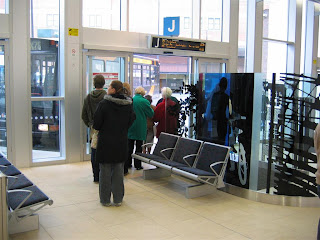 The Competition Commission has today published detailed and wide-ranging proposals to open up bus markets across the country to greater competition. Well that's what they say, having spent much time deliberating information demanded from UK operators.
Jeremy Peat, Chairman of the Competition Commission Local Bus Market Investigation Group, said:
These measures aim to get to the heart of the problems we have identified and open up local bus markets to entry and expansion—so reducing the number of areas where the main operator faces little or no competition. Together these measures are designed to address the specific factors which prevent competition developing and being sustained at a local level and lead to passengers losing out.
This is a comprehensive set of practical and sensible measures which will help encourage more competition and benefit passengers.

The CC’s proposed remedies include:
• Increasing the number and effectiveness of multi-operator ticketing schemes, by giving LTAs additional powers to introduce and reform schemes on terms that make them effective and attractive to passengers. Recommending changes to the Ticketing Block Exemption to assist this process.
• Restrictions on bus operators making changes to service frequency—to discourage ‘over-bussing’ and other short-term actions to destabilize competitors. Recommending that Traffic Commissioners introduce and enforce a Code of Conduct to prevent un-acceptable behaviour. Limited protection for municipal operators during a sales process.
• Ensuring that new entrants and competing operators can get access to bus stations managed by other local operators on fair, reasonable and non-discriminatory terms.
• Recommending that the DfT update its best practice guidance for LTAs on tendering for supported services and that the Scottish and Welsh Governments develop suitably tailored guidance to maximize the value for money obtained through the tendering process. LTAs to be given power to obtain information about services being deregistered to help them specify any further tenders.
• Recommending that the OFT applies a high priority to identifying bus mergers between competing operators, takes a cautious approach in exercising its discretion not to refer small mergers and updates its competition guidance for the industry.
• Recommending that LTAs consider introducing partnerships with operators as a means of improving passenger information and growing bus patronage, thereby facilitating increased competition via new entry within their local areas. The OFT and LTAs to set up a forum to ensure that any risks in partnerships for competition are minimized.
• Recommending that the DfT, as part of its review of the Bus Service Operators Grant (BSOG) in England, looks at ways to incentivize operators to participate in the above measures. This recommendation may also be of interest to the Scottish and Welsh Governments should they decide to undertake a similar review in the future.
http://www.competition-commission.org.uk/press_rel/2011/october/pdf/111004_bus_mkt_pdr_press_release.pdf


My initial comment would be that "Increasing the number and effectiveness of multi-operator ticketing schemes" is an area that could maybe do with some improvement, but as we have recently seen in Sheffield and Oxford, operators can already work together without falling foul of competition laws. The massive cost of this investigation cannot be justified by the list of half hearted measures proposed and it appears once again that the Competition Commission are trying to ignore the fact that the bus market is largely working in everyone's best interests. It seems a re-run of what happened when UK supermarkets were investigated where nothing needed to be changed there either.