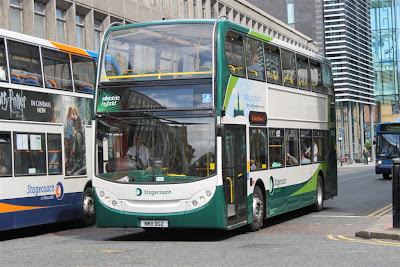 The Extraordinary General Meeting of Stagecoach shareholders took place on Friday 7th October 2011, where all of the resolutions proposed in connection with the return of capital was approved.

Application  has been made to the UK Listing Authority and to the London Stock Exchange to trade in the new ordinary shares arising out  of the share capital consolidation. It is expected that such amendment and admission of the New Ordinary Shares will take place at 8.00a.m. on 10 October  2011. Dealings in existing ordinary shares have now ceased and the shares closed at £2.49.
Shareholders will receive a payment of 47p per share which is expected to be released on 21 October 2011. Their shareholding will be consolidated into New Ordinary Shares which, according to the Stagecoach website, will make the share price directly comparable before and after the Return of Cash. It will also maintain the comparability of future earnings and dividend per share amounts with previously reported figures; and maintain the intrinsic value of awards that have been made under Stagecoach Share Schemes, such as the grant of share options to employees.