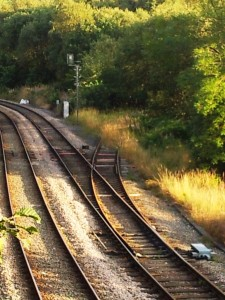 The Todmorden Curve on the rail network, which was last used in the 1960s, is to be revived with a grant from the Government’s Regional Growth Fund. By filling this infamous missing link on the rail system, Burnley and other Lancashire towns will get much quicker services to Manchester, improving access for employment and helping address the deprivation in the area."
http://www.bbc.co.uk/news/uk-england-lancashire-15519605

According to a press release issued by Network Rail and local councils “It will also complement the Northern Hub scheme that will provide an additional 700 trains a day create between 20,000 and 30,000 new jobs opportunities and contribute £4bn to the economy of the North of England.”
http://www.communityraillancashire.co.uk/news/8-8-million-rgf-success-for-burnley

Considering that there is still a connection with current Network Rail tracks this is a massive amount of money just to relay a short stretch of track on an existing trackbed and is maybe one of the reasons that track access charges and therefore rail fares are so expensive in the UK. Nothing is ever carried out at "reasonable rates" and is a big reason that more of these rail revival schemes are deemed not to be viable when the costs are published.
The nearby Colne to Skipton scheme has struggled for years to attract funding for what would be a revival of rail travel in the area and again, the massive costs of this scheme make it difficult to progress beyond where they are now, although the newly announced Todmorden link might help by making travel to Manchester quicker and therefore more attractive.
http://www.selrap.org.uk/