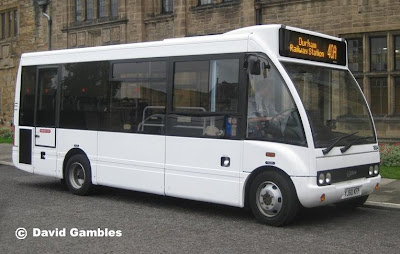 In spite of expressing interest in making a bid for Optare, ADL are now saying that they are no longer interested. This remarkable turnaround comes very soon after ADL formally contacted Optare with a request to see figures.
However, ADL was advised by Optare’s financial adviser, Cenkos Securities plc, that “We have received confirmation from Ashok Leyland Limited that it has no intention of selling its stake in Optare to anyone at any price.”  As Ashok holds 26% of the issued share capital of Optare and ADL has been unable to obtain any of the information on Optare requested on 23 December 2011, the board of ADL has concluded that it will not pursue further its possible interest.
Optare warned last week that it would be unable to continue trading if they didn't receive additional financial backing. Ashok will provide a credit line of £12m through the Indian firm's current banking arrangements.

Ashok Leyland is the flagship of the Hinduja Group and a leading Indian commercial vehicle manufacturing company based in Chennai selling approximately 94,000 vehicles and about 17,000 engines annually and is the second largest commercial vehicle company in India in the medium and heavy commercial vehicle segment, with a market share of about 25.7 per cent. in 2010 -11. Ashok is a market leader in the Indian bus market selling over 23,000 buses annually. The sales turnover of Ashok in 2010-11 was US $ 2.5 billion. Ashok has seven plants in India, one in the Czech Republic and one in the Middle East with a current global capacity of over 150,000 buses and trucks.