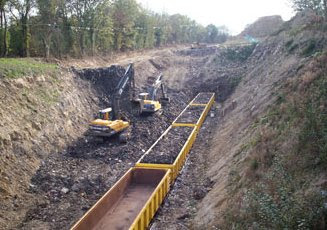 In the late 1960s around 100,000 tons of domestic waste was dumped in Imberhorne Cutting on the Bluebell Line. The railway is now removing this waste in a programme of "Waste by Rail" trains. Because of the good weather (which has enabled GBRf to release a locomotive, which had been reserved for snow clearance, to haul the waste trains), they have been able to add a fourth week to "Waste by Rail 5". Using this extra week to remove waste now, rather than as originally planned for next year, helps move the project forward and assists in getting the cutting to a state where final surveys and designs can be undertaken sooner. The aim is to re-lay track so that the railway can once again be connected to East Grinstead. 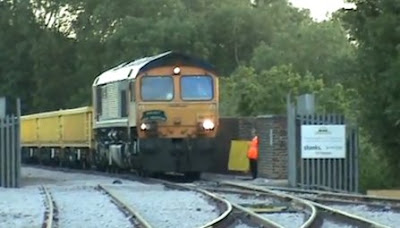 An Appeal is being made for donations to pay for the final removal of waste and funds raised by the Appeal will help secure the Railway’s future by seeing it connected again to the national railway network.
Already the Bluebell Railway’s own platform has been built at East Grinstead station and a connection to the national railway network has been established.  All that remains now is to finish clearing Imberhome Cutting and lay the missing track.
http://www.bluebell-railway.co.uk/bluebell/extend.html