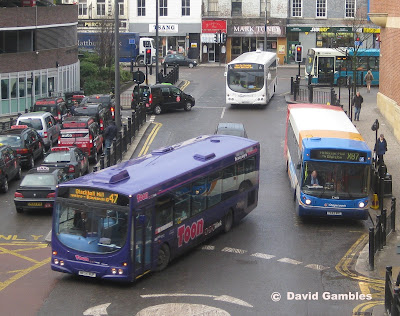 Yesterday the Competition Commission (CC) published its final report into the local bus industry setting out so called "comprehensive measures" which will ensure that passengers benefit from greater competition.

In its final report, the CC has confirmed that in many areas bus operators face little or no competition, leading to passengers facing less frequent services and, in some cases, higher fares than where there is some form of rivalry. The CC also states that the way some local authorities tender for supported services—necessary bus services which would not be provided without public support—can also restrict competition.


The CC has identified a number of factors that restrict entry and expansion into local areas by rivals and otherwise stifle competition. It outlines a package of measures to tackle these factors and open markets up in future.
Jeremy Peat, Chairman of the Competition Competition local bus market investigation Group, said:
Competition and potential competition can drive standards up for passengers —that was the intention behind deregulation. We have seen evidence how competition can, for example, increase service frequencies but the reality is that in too many areas of the country, competition has stagnated and the incumbent providers know that they face little in the way of serious challenge.
As such, the incentive to increase services, innovate and even lower fares is absent. On the occasions when there are outbreaks of rivalry, they don’t tend to last and passengers are quickly returned to something like the status quo without any enduring improvement in services.
We have also seen direct evidence in one case of operators in the North-East of England seeking to avoid competition with each other in order to protect their own ‘territories’.

We believe that encouraging greater competition in the market is the best way to rectify the problems we have identified. Providing more effective multi-operator ticketing schemes, ensuring fair access to bus stations, measures addressing operator behaviour, strengthening the tendering process, close scrutiny of bus mergers, and encouraging ‘competition-friendly’ partnerships between local transport authorities (LTAs) and bus operators will all help achieve this.
We understand that this is a complex and varied market and so we aren’t advocating a single ‘one size fits all’ solution. We have designed remedies that work together to address the problems we have found and can be applied by those on the ground. There is no reason for this industry to be exempt from competitive forces that benefit customers in other markets—it is perfectly feasible for competition to exist within the regulatory framework as it does elsewhere.


According to the BBC News website a spokesman for bus operator Arriva said the company would "consider the lengthy report carefully", but did "regret that the CC seems not to have taken this opportunity to address the impact of competition from private transport which is the main reason behind falling usage of what is a very efficient bus industry".


So there we have it, months and months of gathering information, many many hours of bus operators time devoted to providing facts and figures and it could all be summarised in a few words about "multi-operator ticketing schemes, ensuring fair access to bus stations, measures addressing operator behaviour" etc etc. The real competitor - the private car doesn't get a mention and neither do the popular operator's day and weekly tickets that offer excellent value for money. Customer surveys show a high satisfaction rate in most areas but all of this is ignored and the CC will go off into the distance looking for other industries in which they can blunder around and cause great inconvenience to those involved.