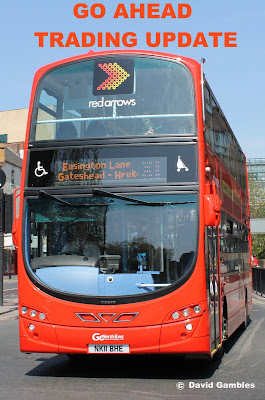 Go Ahead has announced its pre-close trading update for the six months ending 31 December 2011, ahead of its half year results which will be released on 23 February 2012.

Trading in the period has been robust and the Group is expected to deliver operating profit slightly ahead of previous expectations, primarily in the rail division, for the full year to 30 June 2012.
David Brown, Group Chief Executive of Go-Ahead, said:
“While we remain suitably cautious about the medium term wider economic outlook, trading in both our bus and rail divisions continues to be strong, with record numbers of passengers using our services. This demonstrates the resilience of public transport during challenging economic times as passengers seek convenient and value-for-money alternatives to the private car.
“Our bus operations both in and outside London are performing well. Our sector-leading London business has seen growth due to new contracts commencing in the period, and our regional operations continue to make progress through initiatives such as smartcard technology.
“All three of our rail franchises are showing a strong performance. In particular our smallest franchise, London Midland, is achieving double digit growth in both passenger revenue and volumes”.

Email ThisBlogThis!Share to TwitterShare to FacebookShare to Pinterest
Labels: buses, Go-Ahead, railways
Newer Post Older Post Home
The Focus Transport website is intended to appeal to those that have a broad interest in public transport.
We cover topical news items and display high quality photographs relating to the current transport scene and also show archive material from slides and prints that are relevant to the subjects under review.
We publish in-depth articles about transport issues and welcome contributions from anyone who has suitable material.