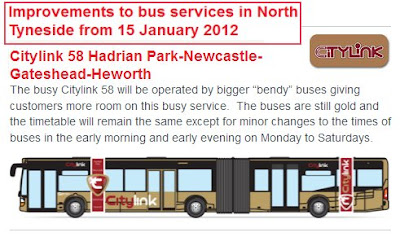 The Bendies are Coming!

Go North East have confirmed on their website that bendy buses are to be introduced on the Citylink 58 cross Tyne route from 15th January 2012.

The ex London vehicles are being painted in the Citylink gold livery in readiness for their introduction.

Although some of the ex London vehicles have been converted to two door configuration for the express services to the Metrocentre, there has been speculation that the remainder will remain as three door vehicles for use on the 58 and the publicity shown on the website seems to confirm this. All will be revealed on 15th January!
http://www.simplygo.com/news/improvements-to-bus-services-in-north-tyneside-from-15-january-2012/