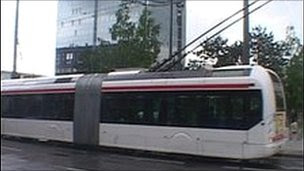 One scheme not on the list of approvals for funding is the Leeds Trolleybus scheme. Transport bosses in Leeds have said they are "astounded" by a government decision to delay a trolleybus scheme.
Plans for the city's £245m scheme, which were first discussed in 2007, have been deferred until next March.
Transport authority Metro said it could not understand why the scheme, which had already been delayed by 18 months, was being deferred again.