Stagecoach Group has accused Edinburgh City Council of “killing off” plans for a cross-Forth hovercraft service by refusing planning permission for the project.
The council’s planning committee rejected Stagecoach’s application for hovercraft landing and passenger facilities at Portobello – only weeks after Fife Council gave permission for similar construction work at Kirkcaldy.
Edinburgh City Council has taken two years to vote on the planning application, which was first submitted by Stagecoach in December 2009 after a series of consultation meetings with communities on both sides of the Forth. Stagecoach has worked on ideas for a sea-based crossing between Fife and Edinburgh for more than a decade, arguing that it offers a faster and greener alternative to car travel across the Forth Road Bridge, one of the most congested routes in Scotland. 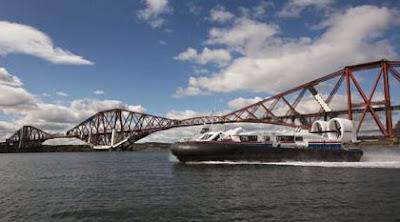 Stagecoach Group Chief Executive Sir Brian Souter added: “This has been a long and painful process. We are completely scunnered and have no intention of appealing against the planning decision.”
The hovercraft link would have given passengers a fast journey time of less than 20 minutes, as well as being integrated with bus services on both sides of the Forth. Peak-time services were planned to run every 25 minutes using two 150-passenger fully accessible hovercraft with the latest propeller technology to ensure low operational noise levels.

An estimated 870,000 passengers a year were predicted to use the hovercraft link after it was fully established. More than 32,000 passengers used the Kirkcaldy-Portobello trial Forthfast service in summer 2007 but now the scheme is dead - thanks Edinburgh City Council.