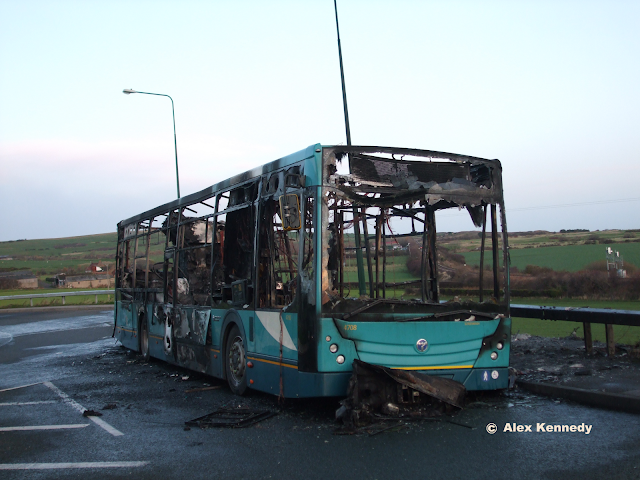 Arriva Temsa Avenue 4708 has been destroyed by an unexplained fire. The two year old North East based vehicle registered YJ59 BHZ caught fire on the A174 between Brotton and Carlin How, near Saltburn-by-the-Sea and was quickly destroyed.
It is rumored that 4700, 4711 and 4712 have also had fires, although less serious, and that 4712 appeared, for some reason, to have received a new rear end whilst still fairly new. The Temsa Avenues are said to have good fire suppression systems in their engine compartments and is probably the reason that any previous fires have not proved too serious. However this particular fire that occurred on 4708 proved too severe for the suppression equipment to have any effect.
Thanks to Alex Kennedy for the use of his pictures and Martin Arrand and Colin Sellers for facilitating this.

Here's a link to a video showing one of the Temsa's climbing the bank at Saltburn in wintery weather. They appear to have excellent hill climbing abilities on icy roads!
http://www.youtube.com/watch?v=IiSAe2Xw0BQ

Here's a photo taken by Steven Hodgson of 4708 in happier times, whilst the bus was working the X3 to North Skelton.

Check for the latest news on  http://focustransport2011.blogspot.com/