Arriva have placed an order for 80 single deck SB-200's. Originally we heard that they would have Citea bodywork but it now appears that the vehicles will have Wright Pulsar 2 bodies in line with the most recent orders being delivered.
The vehicles will be equipped with Euro5 Cummins ISBe six cylinder engines with Voith gearboxes.
It is noted that no further orders for the Temsa Avenue has followed the twenty "59" registered batch based at Arriva North East. As reported on this Focus Blog on 2nd December 2011, one of the Temsas was recently destroyed by fire. http://focustransport2011.blogspot.com/2011/12/temsa-avenue-destroyed-by-fire.html 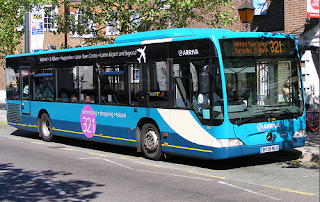 Arriva have also announced an order for 30 12m Citaros for its regional operations. It is thought that the vehicles could be used in connection with the Olympics transport prior to entering service elsewhere within the UK.