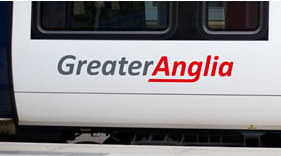 Commuters between East Anglia and London faced a series of delays on the first full day of a new operator taking over the running of the region's train services.
Track problems and a broken down train caused disruption to timetables between London and East Anglia.
Network Rail said "points failures" had been reported near London and in Essex.
Dutch train firm Abellio, which took over the Greater Anglia franchise on Sunday, apologised for the delays.
Network Rail said its engineers had dealt with points failures near Liverpool Street, in London, by 12:00 GMT and at Manningtree, in Essex, by around 11:00 GMT.
Abellio will provide train services across Cambridgeshire, Essex, Hertfordshire, Norfolk, Suffolk and links to London.