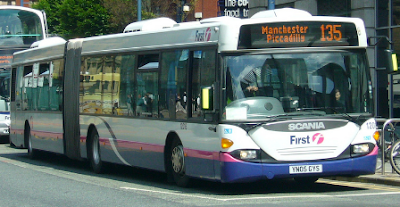 First Manchester will appear before Traffic Commissioner Beverley Bell following an investigation by VOSA officers found that registered bus services were not running within the one minute early and five minutes late rules.
First Manchester carries around 100 million passengers per year on 300 bus routes and its 900 buses clock up around 35million miles per annum.


Under Section 155 of the Transport Act 2000, a traffic commissioner can impose fines of up to £550 per vehicle on firms that fail to hit the 95 per cent target. A spokesman for First said: “We are attending the Traffic Commissioner’s office on Monday and will discuss factors affecting the punctuality of some of our buses in Manchester some 12 months ago.”