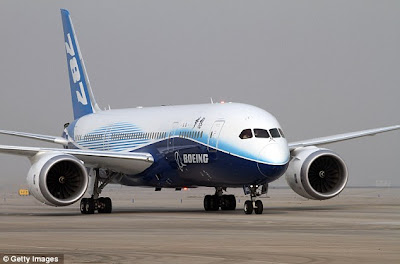 Boeing's flagship 787 Dreamliner is under inspection for possible repairs to the fuselage's structure the company admitted this week.
Some of the structural stiffeners or shims were found not properly attached to the structure's carbon fiber composite which could cause delamination or damage to that outer skin.
Boeing explained the issue, discovered over the last few weeks, to be relevant to only some of the 787s that have been delivered since its launch, but would not say which ones.

The Dreamliner has faced a number of setbacks in cost delays and production since Boeing began its program in 2004.
There are currently 800 orders backlogged for the Dreamliner's manufacture.
With the current structural inspection, software glitches also cancelled two flights between Tokyo and Frankfurt of All Nippon Airway's first long-haul flights in January.