During my final full day in London I concentrated on travelling on some of the hybrid vehicles in service. It's difficult to decide on a favourite but I did enjoy a trip on the Arriva 73 route to Victoria on one of the HV class Wright bodied double deckers. The driver had very light right foot, meaning that he wasn't using large amounts of power to pull away, the result of which was that the engine kept cutting out when the bus came to a stand and moved away silently. During a slow crawl along Oxford Street the bus mostly travelled on battery power giving a real impression that we were travelling on a vehicle that was really environtmentaly friendly. This type has a gearbox which is well set up meaning that gearchanges up and down the box are made very quickly and smoothly, all adding to the impression of a quiet and comfortable ride.
I also enjoyed my trip on a single deck Wright Cadet Electocity vehicle on the 360 operated by London Central, which runs between Elephant & Castle to the Albert Hall. Some of these buses were registered a while ago now but still seem to perform well, as they trundle through contrasting areas, taking in lots of side streets on which you wouldn't maybe expect to see buses operating. The engine rumbles continuously, but it is never intrusive. http://www.tfl.gov.uk/tfl/gettingaround/maps/buses/?r=360 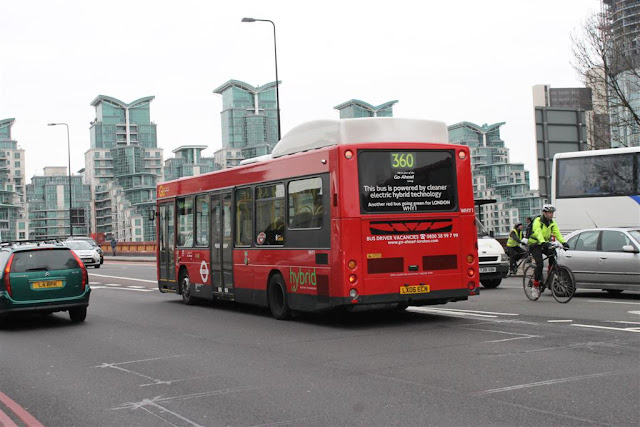 A contrasting route is found on service 15 on which I travelled between Tower Hill in the east to Regent Street. This uses Stagecoach operated Enviro 400 Hybrids and although the buses encounter a fair amount of congestion at major sets of traffic lights, the buses can show off their remarkable powers of acceleration when let loose and the drivers certainly take advantage of this feature whenever they can. Speed build up is stepless with no gearchanges taking place – the bus feels very powerful and the engine note rises and falls in tandem with what the driver's right foot is doing.
Enviro 400H's are also used on the 139 between Waterloo and West Hampstead and I took a late afternoon trip on one of these Metroline operated buses. Unfortunately the vehicle seemed to have a noisy engine that boomed away almost constantly during my journey from Gloucester Place to West Hampstead.
It was interesting to be able to experience all of these vehicles "back to back" and draw comparisons.
The one hybrid I never got to try was the New Bus for London, as it has been delayed by at least another week.
If anyone is fortunate enough to be in London next week and be able to try out this vehicle please send us your pictures and opinions. We are keen to hear!
David Gambles