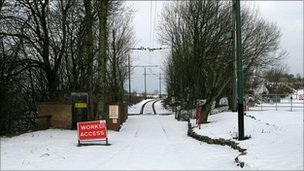 Crich Tramway is reflecting on the £30,000 income it lost due to a delay in opening two weeks ago. Although the museum is now open, it lost valuable income by not being able to welcome visitors during half term week.
The museum opened on the weekend of 18th / 19th February and will do so every weekend up until 31st March, from when daily openings will begin.
On Easter Sunday and Monday 8th and 9th the museum will host a 1940s Weekend. Historic wartime road vehicles will be on show and on the move, mingling with a range of vintage trams which visitors will be able to ride on as often as they like. Some trams will have blackout masks fitted along with anti-blast netting on the windows, blue coloured lamps and white steps. The indicator blinds will be blacked out too so as to confuse any enemy spies. Wartime songs will be belted out by an authentic concert party throughout the weekend.

Email ThisBlogThis!Share to TwitterShare to FacebookShare to Pinterest
Labels: trams
Newer Post Older Post Home
The Focus Transport website is intended to appeal to those that have a broad interest in public transport.
We cover topical news items and display high quality photographs relating to the current transport scene and also show archive material from slides and prints that are relevant to the subjects under review.
We publish in-depth articles about transport issues and welcome contributions from anyone who has suitable material.