Blazefield have placed orders for the following vehicles.
Harrogate & District: 8x Optare Versa in "Connect" black and red livery and 1x Volvo B9TL/Wright for the 36 (see below)
Burnley & Pendle: 2x Optare Versa for Starship services and 7 Volvo B7RLE/Wright for the 152 (thought this was run by Blackburn)
Yorkshire Coastliner: 6x Volvo B9TL/Wright


Blazefield are part of the Veolia Transdev Group, which has 119,000 employees in 27 countries. The UK operations include
London
Transdev is one of London's bus operators through London Sovereign, its wholly owned subsidiary.
Blazefield
Transdev Blazefield provides local and inter-urban bus services through its six subsidiary companies covering much of West Yorkshire, North Yorkshire and Lancashire.
NCT
Nottingham City Transport (NCT) is the largest municipal bus operator in England, providing over 80 per cent of the bus services in the Greater Nottingham area. The Company was established over 125 years ago and has developed and grown, becoming Nottingham City Transport Limited when the bus industry was deregulated in 1986. NCT now carries over 1 million passengers per week on a fleet of more than 325 buses. 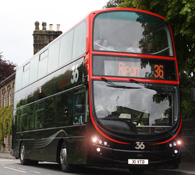 Route 36 Is a prestigious route launched in 2004 when £2.25million was spent on 12 eye-catching double deck buses for the service which links Ripon, Harrogate and Leeds. By 2010 the buses were ready for a refresh, so Blazefield decided to use their in-house design and engineering skills to rebuild existing buses and work in partnership with suppliers to develop superior standards of quality, comfort, safety and environmental friendliness – and all at a cost considerably lower than the new-bus option.

Amongst the innovations are new seat designs. The distance between towns and cities on Route 36 means that passengers can spend, on average, 45-50 minutes on board at peak times, and research has shown that people don’t like spending long periods of time sat next to total strangers. As a result, some of the double seats upstairs have been replaced with individual seats, emulating the ‘2+1’ layout of many first class railway carriages. Downstairs, in contrast, a ‘lounge’ area has been created at the back, so people travelling in a group can sit together, and the unpopular rear-facing seats have be removed. Concealed lighting beneath the seats has also been fitted to illuminate the aisle in a practical and stylish way.

The seats have extra leg-room and all are covered with leather for a more comfortable journey with a luxurious touch. Monochrome artwork depicting landmarks along the route decorate the lower saloon of the bus, whilst poems and prose on the theme of travelling are featured in the stairwell.

The suspension has been improved and extra sound-proofing installed to give the passenger a smoother, quieter, more enjoyable journey. The old 5-speed gearboxes have been replaced with new 6-speed gearboxes, which improve fuel consumption and reduce engine wear. New engines have also been fitted which are more environmentally-friendly - an important selling point in Harrogate, where demographic research has shown environmental matters to be important to residents.

An important feature installed is WiFi - a free wireless internet connection. Given the long average length of people’s journeys, Blazefield felt the ability for their passengers to do work, catch up with emails, surf the internet or engage in social networking to be a valuable addition and that all of these features would help to attract new customers.
http://www.transdevplc.co.uk/media-centre/index.jsp?newsID=21