Britain's last train factory has been offered a potential lifeline after its Canadian owner Bombardier was named as one of four companies shortlisted for a £1bn Crossrail contract. 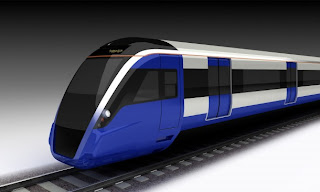 Around 60 new trains will be required. Each Crossrail train will be around 200 metres in length and able to carry up to 1,500 passengers.
The Derby-based plant faces competition from three continental rivals for the task of building 60 trains and a depot for the scheme to run services running east to west across London from 2018.
Also on the shortlist are German manufacturer Siemens, Japan's Hitachi and CAF of Spain.
Contenders for the £1bn Crossrail contract have to state which part of their bid is made in the UK but it will not influence the deal, the government has said. Bombardier, which runs Britain's last train factory in Derby, has pinned hopes for its survival on the Crossrail deal but the tender document does not have a "made in Britain" clause. The four shortlisted bidders will be asked to specify sourcing for each part of the contract to highlight what proportion of the project will be made in the UK. Ministers are barred by European Union regulations from showing bias towards domestic bids.

Candidates will have to set out how they will provide opportunities for apprenticeships, help small and medium-sized companies and have a "local presence" in delivering the contract, which will be awarded in Spring 2014.
http://www.crossrail.co.uk/news/press-releases/crossrail-issues-rolling-stock-depot-tender
David Gambles