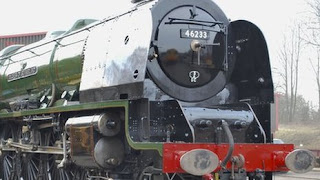 LMS Princess Coronation Class 4-6-2 Pacific, Duchess of Sutherland 46233, has successfully completed her running in period followed by a 'Roll-Out' on Saturday 3rd March 2012 at her base at the Midland Railway, near Ripley, Derbyshire.
The special main line tour on has been re-scheduled to Thursday 29th March due to the booked path not being available between Lichfield and Crewe on Wednesday 28th March.
This is due to a Network Rail measuring train running on the same route and then also sitting in platform 12 at Crewe for two hours.

The times have also had to be brought forward and an opportunity has been given to
offer an additional pick-up option of SHEFFIELD.
The train will be steam hauled by 46233 Derby - Crewe - Derby and operated as a main line loaded test run.
The train will use other traction on the remaining sections of the journey.
http://www.prclt.co.uk/New_6233_Overhaul.htm