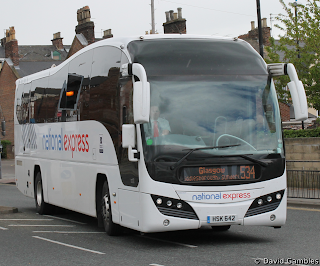 With the announcement this week of impressive  full year results for the year ended 31st December, National Express Group Chief Executive, Dean Finch, said: “In just two years National Express has moved from reporting losses to the record profits we have announced today. With a record financial performance in 2011, we are now delivering industry-leading performance in most of our markets and are well positioned to exploit emerging growth opportunities. Following a strong end to 2011, we expect passenger revenue to continue to grow in each of our bus and coach divisions. " The figures include record profits in the UK Coach Division.

Email ThisBlogThis!Share to TwitterShare to FacebookShare to Pinterest
Labels: buses, Nat Ex, railways
Newer Post Older Post Home
The Focus Transport website is intended to appeal to those that have a broad interest in public transport.
We cover topical news items and display high quality photographs relating to the current transport scene and also show archive material from slides and prints that are relevant to the subjects under review.
We publish in-depth articles about transport issues and welcome contributions from anyone who has suitable material.