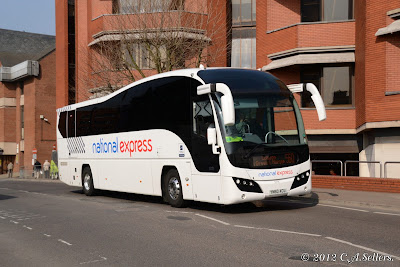 National Express have announced the biggest shake up to Britain’s cross country coach network in 25 years – creating 230 new journeys, faster travel times and stronger transport links to key tourism regions such as Blackpool, West Wales and the South West.
Britain’s largest scheduled coach operator has relaunch its cross country network - which links around 500 destinations across England, Scotland and Wales -following a major ten month planning project to modernise coach travel.
230 new route combinations have been made available by coach including Cardiff to Carmarthen, Blackpool to Wolverhampton and Gloucester to Nottingham. To help boost tourism across Britain additional journeys have been made available to major cities like Birmingham, Bristol and Leeds while seaside resorts like Blackpool and Weston-super-Mare will now receive a year round service. A new direct link is also available from Manchester to the south coast.
Cross Pennine services see significant improvements with faster journey times from the North East to Manchester, Manchester Airport and Liverpool cut by one hour 40 minutes. For the first time services between Manchester and Sunderland will be faster than local rail. Train passengers on the same route face up to three changes and journey times of between 12 and 26 minutes longer. 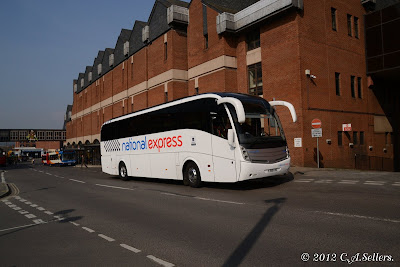 Andrew Cleaves, Managing Director of National Express Coach said: “This is one of the biggest changes Britain’s coach network has seen in 25 years. It will deliver hundreds of new journey combinations and more connections between major towns and cities. Our cross country network covers 13 million miles every year and we want to ensure every route offers the best combination of destinations, price and journey time for customers.”

Email ThisBlogThis!Share to TwitterShare to FacebookShare to Pinterest
Labels: buses, Nat Ex
Newer Post Older Post Home
The Focus Transport website is intended to appeal to those that have a broad interest in public transport.
We cover topical news items and display high quality photographs relating to the current transport scene and also show archive material from slides and prints that are relevant to the subjects under review.
We publish in-depth articles about transport issues and welcome contributions from anyone who has suitable material.