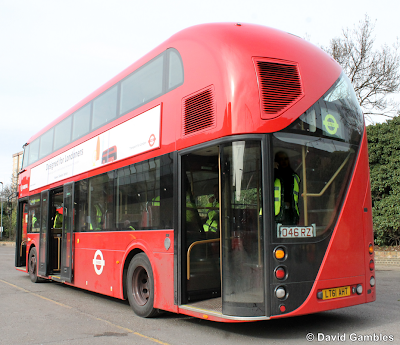 Leon Daniels, Managing Director of Surface Transport, Transport for London, has an excellent blog site, covering news of the transport scene in London. One of the most publicised events of late has been the introduction of the New Bus for London. There are many rumours and myths circulating in connection with the new bus and on his blog, Leon Daniels sets out to correct the record and dispel some of the myths, which are reproduced below.

LT1 has not gone back to Northern Ireland for repairs because "it keeps breaking down".
In fact it hasnt gone anywhere at all. It is still here.

It has never broken down although it did run out of fuel on a trip to MIRA last year. LT1 has been used extensively in the UK for the required European Whole Vehicle Type Approval process. For this it undertakes numerous tests and many of these were at MIRA. For that purpose it was built - deliberately - with access for various components. Some of these had to be tested specifically or needed adjustment during the process. With the tests completed it always had to return to Ballymena for completion. This will take place shortly.

With the Type Approval granted it was natural that LT2 - complete at Ballymena - could be certified and delivered. As a result it entered service on Monday 27th February. It had a sensor which misbehaved on Monday and needed tweaking. It also had programmed downtime during the week for attention by Wrightbus. Of course it had some curtailments due to traffic congestion too.

As a brand new type of vehicle with few miles on the clock there will be issues to be resolved. Although another of the prototypes has done many thousands of test miles at MIRA, nothing can replace good, hard-working passenger miles in service. That is why we have prototypes and why we run them in service.

I would remind critics that RM1 was delivered in 1954 and didn't enter service until 1956. Despite all that attention within about four days it had a gearbox change. After years of prototype operation, the first production Routemasters suffered numerous failures. Ken Blacker recalls its slang nickname 'Jerkmaster'. A mass delicensing and return to the manufacturers was triggered by the collapse of a steering column in 1961. Over time all of the problems were resolved and history now recalls the Routemaster as an amazingly reliable and fuel efficient bus.

Another continuing media story is the price tag. You will appreciate you can of course always take the entire development cost and spread it over the prototype fleet and come up with an amazing sum. In fact if you do that with the Airbus A380 or worse still the Boeing 787 you can get an even bigger number. (US$32bn for five aircraft in the case of the latter).

Those who do are of course mixing up the sunk cost of the development with the unit cost of the labour and materials to build the vehicle. In production the unit cost of an LT will be broadly comparable with modern hybrid buses. To the extent it is in any way more expensive should be compensated by its long life, amazing fuel efficiency, and reduced emissions.

For years there has been a continuous pressure from certain quarters that the 'off-the-peg' vehicles built by the manufacturers were inadequate for intensive London operation. That was probably true in the late 1960s/early 1970s but not really the case more recently. But no matter - it remained true that London was operating buses built out of truck components by high volume manufacturers in an effort to hold down costs. It was suggested that passengers would benefit from an admittedly higher-cost solution - a bus aimed squarely at London's unique conditions and led by passenger preference. Well now that we have built some.

And lastly - conductors. I am sure in my recent lifetime I have heard overtures about the need to have conductors to ensure passengers' safety, minimise revenue loss, and speed boarding/journey times. I can even recall the criticism as they were progressively abolished.

Now we have the return of the much-loved open platform and the attendant conductor.......and now criticism for the opposite reasons!

So - what is my point? After decades of much-voiced concerns London now has it vehicle built to its own specifications, designed around a huge input from passengers, and to a much higher standard than we have seen previously.

We are proud of it. Passengers' and Londoners' initial reactions are equally positive. We look forward to learning much more about how it performs and the features passengers mostly like. There is no doubt experience will bring about some changes and refinements.

However it all unfolds this is the first purpose-built new bus for London since 1969 and a project which was inconceivable during the 40+ years which have elapsed since then. For my part, I am working to make it a success!! Where are you? http://leondaniels.blogspot.com/2012/03/new-bus-for-london-myths.html


Focus Comment
It is good to hear some of the myths dispelled and we hope that further orders for NBfL will be forthcoming. We understand that to a large extent, it depends on the outcome of the forthcoming London Mayoral elections and if Boris Johnson fails to get re-elected it could be that the new bus project will not continue.
We hope that is not the case, as it would be a shame to see all the skills and associated costs wasted on just eight vehicles. We wish it well.
David Gambles

Email ThisBlogThis!Share to TwitterShare to FacebookShare to Pinterest
Labels: buses, NBfL
Newer Post Older Post Home
The Focus Transport website is intended to appeal to those that have a broad interest in public transport.
We cover topical news items and display high quality photographs relating to the current transport scene and also show archive material from slides and prints that are relevant to the subjects under review.
We publish in-depth articles about transport issues and welcome contributions from anyone who has suitable material.