The Flying Scotsman will be unable to carry the Olympic torch as it passes through North Yorkshire later this year, it has been revealed.
The locomotive had been expected to transport the Olympic flame from York to Thirsk on 20 June.
The York-based National Railway Museum (NRM) said further essential remedial work was needed on the engine.
The Scots Guardsman, which featured in the 1930s film Night Mail, will carry the torch instead.
The NRM said that 'further work on the Flying Scotsman had been identified recently, which involved the manufacture of new parts which is a huge disappointment' The museum said while technically unchallenging, the work would be time consuming and meant the locomotive would not be available in June.
Steve Davies, director of the NRM, said: "Whilst we share the public's huge disappointment that Flying Scotsman is unable to carry the Olympic flame, Scots Guardsman is a suitably prestigious locomotive and we are certain it will rise to the occasion of these Olympic duties. Flying Scotsman is almost 90 years old and is the sole survivor of its class and its restoration is one of the most complex engineering projects of its kind ever undertaken in Britain."
"There have been a number of points like this where unforeseen issues have arisen that have caused delays." 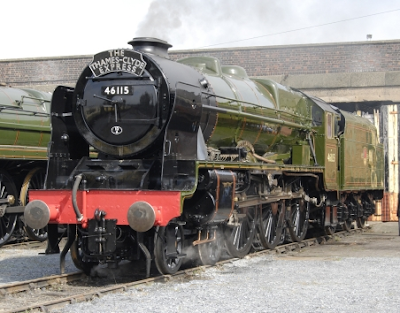 Scots Guardsman was built in 1927 and is one of only two remaining of the original 70 LMS Royal Scot Class locomotives built, all of which were named after regiments in the British Army.
West Coast Railways purchased the locomotive in 2008 and restored it to mainline-running standard.
The Olympic flame will arrive in the UK from Greece on 18 May and will travel across the country before the opening of the games on 27 July.
The torch will pass through North Yorkshire between 18 and 20 June.