‘Vote of confidence’ in region’s buses  7th March 2021
More than 9 out of ten bus passengers in Tyne and Wear are either ‘satisfied’ or ‘very
satisfied’ with their bus journeys, according to the latest survey from Passenger Focus.
And the results are being hailed as a ‘vote of confidence’ by North East Bus, the bus
operators’ association for the region.
Kevin Carr, association chair, said: “91% of bus passengers in Tyne and Wear said that they
were satisfied or very satisfied with the bus experience. This compares with an average for
the metropolitan areas as a whole of 84%, and 85% or 86% across the rest of the country. Bus
companies in the region must be doing something right to come out top.”
North East Bus has been established to provide a view on the proposals from Nexus and its
Integrated Transport Authority to grab control of buses running in and into Tyne and Wear.
Mr. Carr said: “This is a tremendous vote of confidence in the county’s bus operators. It’s got
to cast doubt on the ITA’s wish to impose Quality Contracts. If it ain’t broke, why fix it?”
“The report also highlighted the value of bus services to the local economy. While one third
of all trips are journeys to and from work, another third are shopping trips, helping to
underpin the county’s retail sector.”
“And one in four of Tyne and Wear’s bus users do so because it’s more convenient or cheaper
than owning and running a car.”
“Tyne and Wear’s buses also lead the field in measures of quality such as cleanliness, ease of
boarding and comfortable seating.”
Passenger Focus, the independent passenger watchdog, carried out its bus passenger survey
last autumn across 23 regions in England. 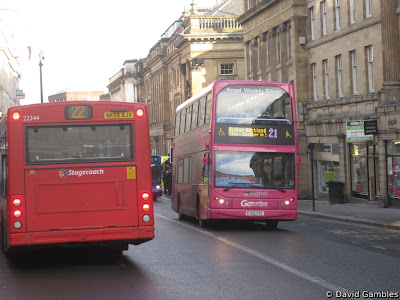 OPERATORS’ ASSOCIATION
The North East Bus Operators’ Association has been established at a time when buses in
the region are facing some of the biggest changes for more than a quarter of a century.
Nexus and the Tyne and Wear Integrated Transport Authority (ITA) are proposing to take
control of all buses that run in and into Tyne and Wear. This could have repercussions for
every bus service in the North East of England. North East Bus brings together all bus
operators in the region to ensure that all the issues surrounding these proposals are
publicly debated.
Focus Comment  These results show that the proposals by Nexus and the Tyne and Wear Integrated Transport Authority (ITA) to take control of all buses that run in and into Tyne and Wear are misguided. The takeover could be bad for the majority of passengers who, as we see from this survey, are very happy with the services in place.
A cynical view is that maybe the intention of taking control of buses is to remove the element of competition between the Tyne & Wear Metro. If Nexus and the ITA control both buses and Metro, passengers could be forced to accept compromise on bus service levels in order to force them into using the Metro.
The Metro is already a drain on public finance, it is receiving high levels of subsidy just to keep it running. The renovation programme is behind schedule and is overspent and it is more expensive to travel on compared to buses.
The bus companies are continually investing in new vehicles and don't depend on public money to keep them afloat. Yes, they receive a (diminishing) amount of BSOG (fuel duty rebate), but rail and airline companies don't pay any fuel duty. Yes, they receive (diminishing) Concessionary Travel re-imbursment for the passengers they carry, but that is a nationwide scheme forced on them by government. None of these reasons give the right to take away the business that they have built by running their companies in an efficient way and by giving passengers what they require.
As always, there are some geographical areas within Tyne & Wear that don't justify investment in bus services. That is where the ITA should step in and subsidise the services if they think fit. That is their role in life, if they choose to run a service that carries one or two passengers and a lot of fresh air, so be it, it is no excuse to try and beat the bus companies about the head because they choose not to run uneconomic services.
The local bus companies are right to draw attention to the high customer satisfaction levels shown by this survey. It is reality, it is not pie in the sky thinking!