Clan Line, the 1940s steam locomotive has arrived at a Dorset seaside resort, 46 years after it was banned from travelling along the route because of its bulk. 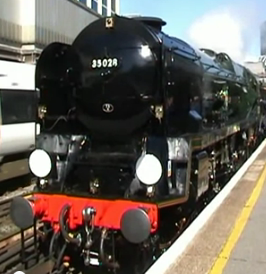 In 1966, Clan Line, which weighed 150 tonnes, was prevented from travelling past Wareham as it was too heavy for the single branch line to Swanage.
Smaller locomotives hauled trains to the resort instead.
Swanage Railway Company chairman Peter Sills called it "the greatest preserved Southern Railway steam locomotive".
The journey can be made today because under-bridges on the rebuilt Swanage Railway were strengthened during the early 1990s to carry Merchant Navy class steam locomotives.
Before the journey Mr Sills said: "It will be great to finally welcome Clan Line to Corfe Castle and Swanage 46 years after it was prevented from running down the branch line from Wareham because of the British Railways locomotive weight restriction policy of the time.
"Named after Merchant Navy shipping companies, locomotives like Clan Line hauled long express trains from the capital to the coast, so this 12-coach excursion train from London to Swanage is very fitting and has great historical resonance."
The train arrived in Swanage at 13:53 BST, on schedule.