South West Trains has announced the completion of a £2.2 investment programme to deliver regenerative braking across its fleet to save energy and provide even greener trains. 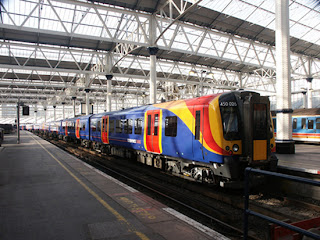 The programme has involved installing equipment on more than 200 electric trains which operate on the South West Trains network. These trains run services in the London suburban area, to Guildford, Alton, Portsmouth, Reading, Southampton and Weymouth. They are all now fitted with the new energy-saving technology.
Energy produced by a train equipped with the regenerative braking system returns electricity to the third rail system, allowing trains in close proximity to draw on the electrical supply. The technology saves 50 million kWh of electricity annually, enough to power more than 11,500 UK homes for an entire year.
Trains fitted with the technology include: the whole fleet of 30 Class 458 trains and the 172 Siemens Desiro trains (Classes 444 and 450). The modifications to the Desiro trains were carried out by Siemens technicians during the nightshift and at weekends to minimise disruption to the service.
South West Trains Engineering Director Christian Roth said: “The roll-out of the regenerative braking system is a significant step forward in the environmental performance of our trains. It would not have been possible to coordinate and implement such an ambitious programme without the support and excellent working relationship with our Desiro Maintainer ‘Siemens’.  Trains are already one of the most environmentally-friendly forms of transport and the completion of this project will provide our passengers with an even greener and smarter way to travel.
“We anticipate our energy consumption on the suburban network, where the first trials took place, will be reduced by up to 20%. As well as the obvious cost-saving benefits, we are also ensuring that energy previously lost is being put to good use by recycling it and helping to power other trains.”
The regenerative braking project, which has been carried out in partnership with Network Rail and rolling stock providers Alstom and Siemens, is part of a major £11 million investment across Stagecoach Group as part of its sustainability strategy.