AEC on the Move at Last

Yesterday we told the first part of the story about the 1953 AEC Plaxton coach that needed to be moved from its resting place of 18 years. The batteries had been connected and the starter button pressed. Would it start - yes, it thundered into life with a deafening crackle. Anthony Hamer found that the accelerator had two settings, full on or off and faced a complicated challenge of shunting the vehicle backwards and forwards until it could be driven out of the door.
This was eventually accomplished and for the first time we could get a good look at this remarkable vehicle.
Eventually she was driven out of the building and we could see what needed to be done to get her fit for the 40 mile tow. Tyres were pumped up and various bits of bodywork we secured to ensure nothing would come astray on the journey south. The Cumbria Classic Coaches Bedford was connected with a rigid bar, a new trailer lighting board was fitted to the rear of the coach and wired up, giving lights and indicators and we were ready for the off.

The drive to the main road would be a good test as to whether everything was secure as the road is badly rutted. Our view from the security of the Land Rover escort vehicle detected some slight movement between the rear of the coach and the remaining bodywork, but everything stayed together and we reached the main road with no mishaps.
The plan was to stop after a mile or so and check around the vehicle to see if all was well - however, after a few minutes the board containing the coach company name and the number plate worked loose and we made a stop to remove it and on we proceeded at a steady 25 mph. 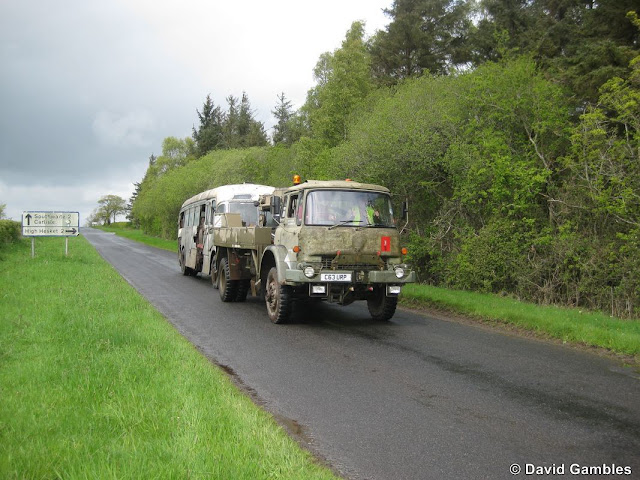 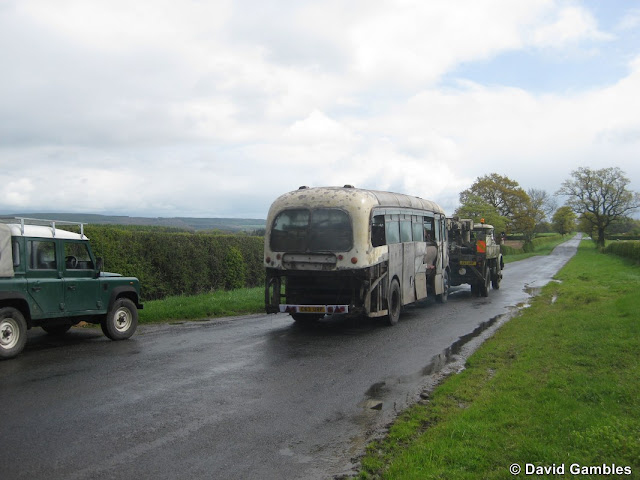 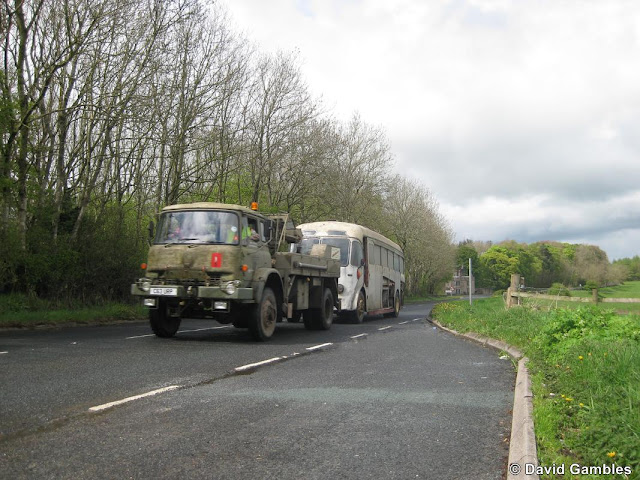 We now know why the local lady in the Mercedes never reverses - she can't! After the hitting a wall at the first attempt she made various tries to proceed in a backwards direction and eventually ended up on the opposite side of the road, with just enough room for our convoy to proceed.
So we approach Bowber Head, the only way to enter the premises with such a long combination of vehicles is to take a run over the fell on a steep slope. Would the Bedford get traction after all the rain?

So the convoy arrives at the Bowber Head Bus Depot and the new vehicle is shunted into one of the bus bays. It's the end of an interesting 40 mile trip and the aim of the exercise has been achieved in around three hours.

More pictures of the journey can be seen on the Cumbria Classic Coaches Blog.
http://www.vintagecoaches.blogspot.co.uk/