When the list of successful applicants was published for the third round of Green Bus Funding, an allocation of £436,000 was shown for the Tyne & Wear Bus Company for 5 single-deck hybrid electric buses.
At the time nothing was known about this company, who weren't currently running any services in the Tyne & Wear area. It now transpires that the company never a had a licence and could therefore not run any vehicles in service. How the Green Bus Fund was allowed to let this one slip under the radar is a mystery, as you would expect that an award of £436,000 should go with some security checks.
According to the latest Notices & Proceedings for the north east traffic area, a licence has now been granted to this company, with the proviso that bank statements are to be submitted to the traffic commissioners office. Presumably if the owner of the company can find the remainder of the money to purchase the five hybrid vehicles in question this company must have some plans to register routes on which the buses can be used? 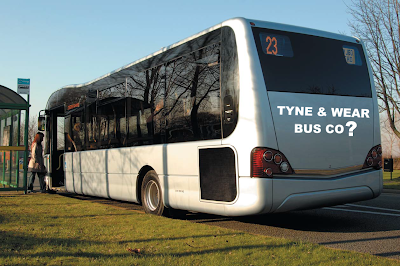 We wonder whether any promises have been made to the potential new operator, as to whether some of the routes up for tender in the Tyne & Wear area would be allocated to them.
The whole matter seems to bring some questions as to whether the Green Bus Funding should be allocated to just anyone who can put a good case together. We would have expected that these awards could only be given to current operators with a valid O licence and who had a track record with established routes. It also brings up the question of who actually owns the buses that have been partly or fully financed by Green Bus funding. If the operator gets into financial difficulties, can the DfT lay claim to the vehicles or could they just be sold off by administrators?
Have promises been made to this company regarding guaranteed work for five buses?
We will report on this situation as it develops.
David Gambles