The union representing staff and cleaners on the Tyne and Wear Metro has confirmed its members are to be balloted on strike action. 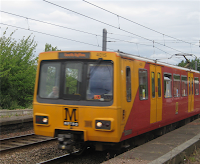 DB Regio, which runs the Metro, and cleaning provider Churchills will see staff vote on new pay proposals.
Churchills has offered workers no pay rise but a minor increase in holiday and breaks, while DB Regio has offered employees a salary increase of 1.3%.
The RMT, representing Churchills staff, called the proposal "insulting".
The union said the 1.3% raise DB Regio workers have been offered was "pitiful", describing the proposal as "way below the current rate of inflation and a de facto pay cut".

DB Regio issued a statement saying the increase on offer was "realistic and affordable". The company called the union's decision to suspend negotiations and ballot members "disappointing".
A Churchills statement said the offer the company had made to workers, which amounts to additional training and an extra day's holiday per year in place of a pay rise, was "generous".
RMT general secretary Bob Crow called the ballot a vote on "action in the battle to eliminate poverty pay", with the union saying that many workers employed by Churchills currently earn minimum wage.
Mr Crow said: "It wasn't transport workers who created this economic crisis and we will not sit back and wait for our members to take the hit in their pockets."
The relevant ballots will begin next week and conclude on 22 May. A vote in favour of strike action could cause a suspension of the entire Tyne and Wear Metro.
A strike last November over changes to pensions brought the service to a complete standstill.