The government has confirmed that Tram-trains which run on street tracks as well as railway lines are to be piloted in South Yorkshire in a scheme worth £58m,
Starting in 2015, the newly-built tram-trains will run on local tram routes and Network Rail lines between Sheffield, Meadowhall and Rotherham.
The two-year pilot scheme will be the first of its kind in the UK.
Transport Minister Norman Baker said the pilot would test the concept for a possible wider roll-out across the UK.
Announcing the final go-ahead for the pilot scheme, Mr Baker said it would help to determine the practical and operational issues surrounding the running of tram-trains.

South Yorkshire Passenger Transport Executive would take the lead in providing the new tram-trains and would sponsor the pilot in collaboration with Network Rail, Northern Rail and Stagecoach Supertram, said Mr Baker.
The £58m budget would cover the cost of the new vehicles and the necessary changes to infrastructure, he added.
Julie Dore, leader of Sheffield City Council, said passengers would be "extremely pleased" the pilot scheme would take place in South Yorkshire.
"We've been waiting for it for a few years. The country needs to do something like this.
"It will reduce congestion on the roads so it's beneficial to both Sheffield and Rotherham."
The tram-trains are expected to cut journey times and make it easier for people to get into the city centres the vehicles serve.
They are said to be lighter, more energy efficient and have faster acceleration and deceleration than conventional trains. 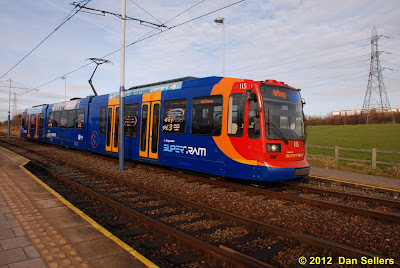 
The question for Rotherham town centre is whether this will attract people, or encourage them to go and shop in Sheffield or Meadowhall.
That aside, it is being seen as a boost for the economy, and along with plans to trial a travel card similar to London's Oyster system, the Government and Transport Executive hope it will get commuters off the Parkway and onto trams.
Seven special tram-trains will be brought in that will be able to cope with both sets of tracks and the different levels of tram and train platforms.
You will be able to hop on in Sheffield and get off in Rotherham from 2015, but the project is a trial for two years and there is no guarantee it will continue after that.
Having already worked well in Europe, other cities here, including Manchester, will be looking to see if it is a success.
"It will also allow us to gauge passenger perception and acceptability of tram-trains," he said.
http://www.bbc.co.uk/news/uk-england-south-yorkshire-18100674

Email ThisBlogThis!Share to TwitterShare to FacebookShare to Pinterest
Labels: railways, Stagecoach, trams
Newer Post Older Post Home
The Focus Transport website is intended to appeal to those that have a broad interest in public transport.
We cover topical news items and display high quality photographs relating to the current transport scene and also show archive material from slides and prints that are relevant to the subjects under review.
We publish in-depth articles about transport issues and welcome contributions from anyone who has suitable material.