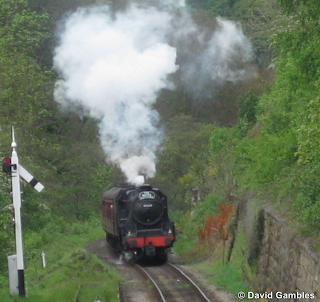 A rail worker has died after becoming trapped between two trains on the North Yorkshire Moors Railway.
The man died at Grosmont Station on the heritage line at about 12:30 BST yesterday, British Transport Police (BTP) said.
Officers from BTP and North Yorkshire Police attended the incident, which is not believed to be suspicious.
BTP said an investigation had started and the Rail Accident Investigation Branch had been informed. All services are currently suspended.
In a statement BTP said: "Paramedics attended, but the man, who is believed to be in his sixties, was pronounced dead at the scene.
"An investigation is ongoing to establish the full circumstances surrounding the man's death."
Services suspended The railway is a popular tourist attraction staffed by volunteers, which runs steam trains through National Park moorland on an 18-mile (29km) route from Grosmont to Pickering.
As well as carrying tourists, the line has appeared in a number of films and television programmes, including Harry Potter and the Philosopher's Stone and the ITV series Heartbeat.
A statement on the railway's website said: "All services are currently suspended due to a serious incident at Grosmont.
"The North Yorkshire Moors Railway apologises for any inconvenience caused."