Bus workers in London have voted to take strike action in a row over their workload during the Olympics.
Nearly 40% of Unite members working for 21 bus companies voted 94% in favour of strike action. No dates have been set. 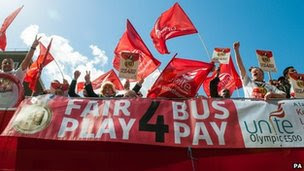 The union, which is asking for a £500 bonus, says bus workers are the only London transport workers not to receive an Olympics bonus payment.
Transport for London (TfL) said bus workers were employed by private firms who set their pay.
Dates for strike action could be announced early next week.
Unison says it expects 800,000 extra passengers to travel on buses during the Games.

It said workers on London Underground, London Overground, Docklands Light Railways, Network Rail and Virgin would all receive between £500 to £900 in extra payments.
In May, a survey of 2,955 London bus and rail passengers commissioned by the union found that 88% were in favour of Olympic bonus pay.


Peter Kavanagh, Unite regional secretary for London, said: "It's a disgrace that London's mayor, Boris Johnson, and the bus companies have allowed this dispute to get this far.
"Our members are only asking for an extra £17 a day which will just about buy you a pint of beer and a portion of fish and chips at the Olympics.