Phil G has sent us pictures of the Imber services that operated on 4th June, with a star guest taking part in the proceedings. 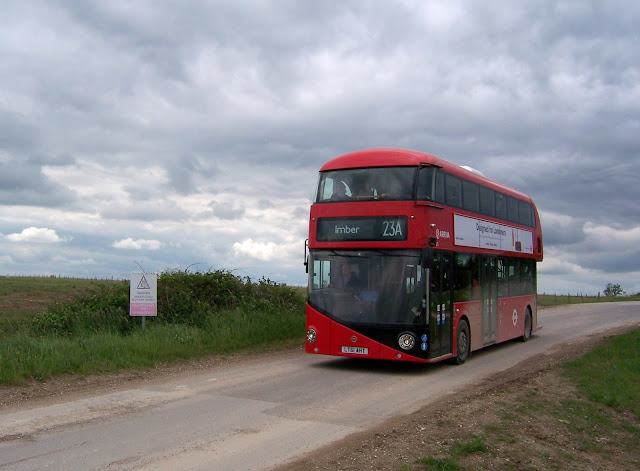 Amidst all the special Jubilee events that took place during the weekend was one that went unoticed by the National Press, namely the first local bus service operation outside Greater London by a Borismaster

For the last few years, a small group of bus industry professionals have organised a special bus service across the Salisbury Plain in Wiltshire, primarily to serve the lost village of Imber which was evacuated in 1943 to enable the area to be used as a military training ground.  The service, 23A, runs once a year but unlike other one-off events run by enthusiasts using preserved vehicles, this is a fully registered local bus service complete with roadside timetables, full destination dislays and conductors taking fares.  The service even appears on Traveline !

The service is normally operated by former London Transport Routemasters from a variety of different sources, but this year they were joined by LT1 - the prototype New Bus for London on what is believed to be the first use of this type in commercial passenger service outside Greater London.  The bus performed faultlessly throughout the day but the open rear platform and dusty conditions across the plain meant that it needed a very thorough cleaning when it got back to London !

A few photographs of the different vehicles in use are shown here but a much more comprehensive selection are available on Flickr athttp://www.flickr.com/photos/katie_pickersgill/sets/72157629997264229/ .