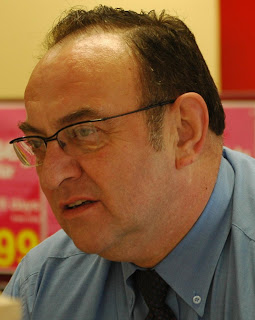 It is with great sadness to report the death of Richard Smith, he died on Monday (11/6/2012) teatime of a heart attack. He was a well known character working for Stagecoach Chesterfield as a travel clerk in the coach station.
I first encountered Richard over twenty years ago when the then East Midland were operating a Routemaster on route 72 to Meadowhall and he was conducting, he had lightened the journey by telling humorous anecdotes.
Richard was an avid collector of photos and models of buses he had just that morning taken delivery of the EFE model of Chesterfield’s 34720. Our sympathy to his family. I will miss him.
Colin Sellers


Stephen Read, Operations Manager, Stagecoach Chesterfield, had this to say about Richard.


Richard loved his job with East Midland, achieving around 40 years service before retiring through ill health about 18 months ago.  Richard was held in very high regard by all those who knew him, and loved by his customers, many of whom would call into the Coach Station to simply say hello.  He held a wealth of knowledge about the services operated by not just Stagecoach but other operators in the region, often being able to give the details to an enquiry without the need to even check the timetable and was a valued member of the Chesterfield team.
I particularly enjoyed listening to Richard talk about his experiences whilst conducting, especially when he talked at length about the fleet of Lowlanders.  On the few occasions he came into my office, the old photo's I have on my wall would always evoke so many memories for him and I always felt a special pleasure to be privileged to share these memories.
Richard will be greatly missed.
Stephen

The funeral is on Thursday 21st June at the
Chesterfield Crematorium  10:50am