Focus Transport team member Richard Lomas, the founder of this Blog, sadly died on 25th May 2012 following months of illness.

It was most appropriate that Richard, a lifelong transport enthusiast, should travel by bus for part of his final journey to the crematorium. And what a bus! 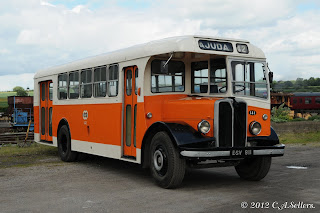 Now registered ESV 811, this 1948 AEC Regal III, number 141 in the Carris fleet, worked the streets of Lisbon, Portugal, until 1984 when a consortium, including Richard and Kath Lomas, took ownership and brought it back home to England. After resting in various farm buildings in the south, the AEC moved to Butterley Road Transport Museum when that undercover facility was being developed twenty or so years ago. Recently this unusual (for the UK) left hand drive vehicle has been prepared, with the assistance of John Peck, to run once again on public roads.

Thus in the early afternoon of Wednesday 6th June 2012, Richard’s coffin was transferred to 141 at Butterley in front of steam locomotive 73129. The family boarded the bus and as it set off 73129 blew its whistle in a haunting tribute to a dedicated transport enthusiast. 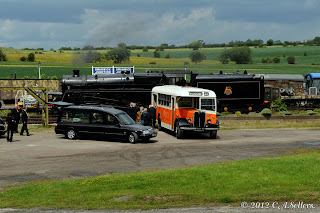 Colin Sellers had agreed to photograph the AEC on this special journey, with Oliver Foreman endeavouring to keep his car and Colin with camera in front of the bus, a task that because of the speed of this ancient AEC proved impossible!

The bus made its way down the Butterley Coach Road and turned right onto the steep uphill on Codnor Lane. A further right took the party through a factory estate, then right again onto the A610 Nottingham Road heading for Ripley. 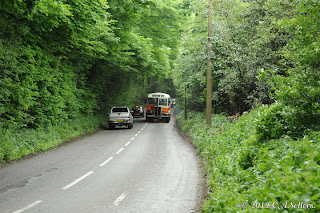 Despite Colin rushing to jump in the car (and almost slipping over and dropping his precious camera!) the bus overtook us as it turned onto Nottingham Road. Never mind, a quick left into Steam Mill Lane should get us to Ripley market place before the bus . . . if there were not roadworks, doddering drivers and traffic congestion to contend with!  Nonetheless, precariously racing across the busy High Street Colin managed a shot as the AEC left the town centre.

We were now behind again as the bus turned left at the mini-roundabout into Peasehill Road and right into Waingroves Road where the coffin was to be transferred to the hearse outside the Lomas residence. Appropriately, just as this had taken place, an Optare Solo on Richard’s local bus service (1A) run by his favourite bus company (trent barton) threaded its way around the parked vehicles including the AEC. 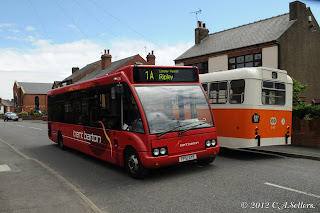 With its duty well done, the Regal turned round with some difficulty and made its way back home to Butterley. 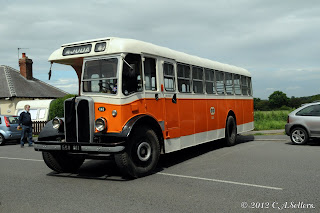 The family with Richard continued their journey in the funeral cars to Markeaton Crematorium in Derby. A full chapel listened to tributes given by the chaplain of the hospital (who with Richard during his months in the Royal Derby had ‘put the world to rights’), by Richard’s oldest friend and fellow transport enthusiast Roger Mercer, and by one of Richard’s and Kath’s two sons. In his thorough and forthright way, it seems Richard had taken his duties as a husband, father and grandfather even more seriously than his obsession with public transport.

Of course, Richard had a particular interest in trams and Crich, a facility he had played his part to develop over 50 or so years. Thus it was most fitting that this celebration of a life continued within the grounds of Crich Tramway Village at the Red Lion where two of Richard’s favourite real ales were on sale.