Buses have a key role to play in growing the economy 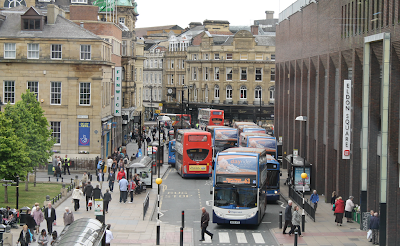 Bus travel is a key contributor to economic and social well-being, according to a new report:
The Buses & Economic Growth Report, published today, was undertaken by the Institute of Transport Studies at the University of Leeds1. It brings together for the first time an assessment of the economic contribution of the bus in growing the economy, connecting people with jobs, helping businesses and supporting the vitality of city centres. It also highlights the significant direct contribution of the bus industry itself in creating employment and investment.
The report’s publication coincides with today’s announcement by Greener Journeys2 to develop a discounted travel scheme to help the one million unemployed young people3 access jobs, education and training more easily. Details of the scheme being developed by the leading bus operators will be announced in the autumn4.
Sir Brian Souter, Chief Executive of Stagecoach Group, said: "For many young people, the bus is the only form of affordable transport available to them and they depend on it to get to their education or training. The discounted travel scheme being developed by the leading bus operators could make the vital difference between a life of worklessness and getting a job, helping more young people to make a better start in life. This shows just how important the bus is to the future of our country."
The report highlights the vital role the bus plays in the wider economy:
The report was commissioned by Greener Journeys, an alliance of the UK's leading bus companies and other public transport supporters committed to encouraging people to make more sustainable travel choices.
Claire Haigh, Chief Executive of Greener Journeys, said: “This report shows the value of the bus in generating sustainable economic growth. Buses play a crucial role in oiling the wheels of the economy as well as reducing carbon emissions, helping maintain the fabric of our communities and providing essential transport for the 25% of households without access to a car."
The report’s author, Professor Peter Mackie of the University of Leeds, said: "The Report demonstrates that buses have a key role to play in growing the economy. The bus is a familiar part of everyday urban life. It receives a fraction of the attention given to rail and car, yet despite being taken for granted it is a vital cog in the wider economy bringing access to jobs and training, facilitating retail spend, and supporting the vitality of our towns and city centres."

1. About the research behind the report
Buses & Economic Growth Report was commissioned by Greener Journeys in December 2011.  The Institute of Transport Studies, University of Leeds undertook fieldwork, research and analysis between January and May 2012.  This comprised analysis of existing data sources such as the National Travel Survey published by the Department for Transport; an internet survey of more than 2,000 bus users; and a survey of stakeholders and large employers.
2. About Greener Journeys
Greener Journeys is a campaign dedicated to encouraging people to make sustainable transport choices. It is a coalition of Britain’s leading bus companies and other public transport supporters. Its primary funders are bus companies (Arriva, FirstGroup, Go-Ahead and Stagecoach).
http://www.greenerjourneys.com/