Further to our posting below regarding comments made by Brian Souter entitled 'Stagecoach Chief Gives Warning' we have been sent this cutting by Go North East which is from the Newcastle Journal which carried the original story.
It is from Kevin Carr, Managing Director of Go North East who corrects some of the journalistic inaccuracies contained in the original newspaper article. 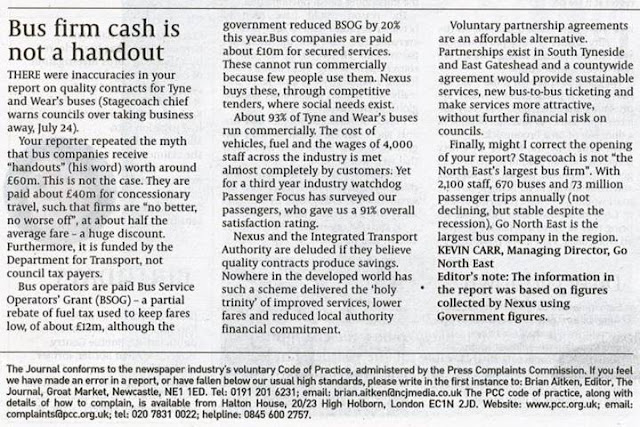 Focus Comment. There is a lot of inaccurate information flowing around on this subject whereby NEXUS and the ITA are claiming that they pay huge subsidies to the bus companies in the North East.
This is not true as they are mostly just handing over concessionary travel payments which come from a central fund. The BSOG helps to put bus companies on a level playing field with rail and air travel where no fuel duty is paid and has recently been reduced by Government policy. As I have said before, NEXUS and the ITA should be concentrating on improving bus services in areas that are not served by commercial services and therefore require subsidy.
The majority of services in the north east are run with no help from local subsidies and NEXUS and the ITA are guilty of pedalling inaccurate information in this respect.

Email ThisBlogThis!Share to TwitterShare to FacebookShare to Pinterest
Labels: buses, Go-Ahead, Stagecoach
Newer Post Older Post Home
The Focus Transport website is intended to appeal to those that have a broad interest in public transport.
We cover topical news items and display high quality photographs relating to the current transport scene and also show archive material from slides and prints that are relevant to the subjects under review.
We publish in-depth articles about transport issues and welcome contributions from anyone who has suitable material.