Bus operators in the north east say they have been ‘encouraged’ by the decision of
transport chiefs in South Yorkshire to reject a quality contract scheme in favour of a
voluntary partnership agreement. 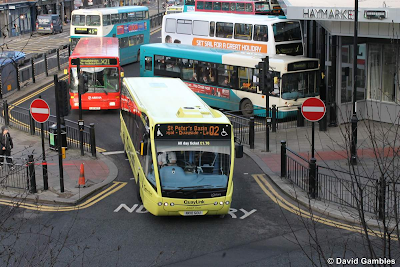 South Yorkshire’s ITA compared a quality contract option with a binding voluntary partnership agreement and concluded that the agreement option provided greater benefits for the travelling public. Tom Dodds, secretary of the North East Bus Operators' Association, said: "Bus operators here remain firmly committed to providing a solid and binding voluntary partnership
agreement, which we believe will provide the best possible solution for Tyne and Wear. “Far from leaving services unchanged, the partnership agreement would see operators held to account for their commitments to services and new bus-to-bus ticketing deals for the public.
“A partnership agreement could be in place in a matter of months, bringing benefits for
passengers much sooner than a quality contract scheme could.
“We have been very encouraged by the decision of the politicians in South Yorkshire to
support a partnership approach in Sheffield rather than a quality contract scheme. That
partnership will attract a further £8.5 million in government funding over five years,
money that isn’t available to a quality contract scheme. If a similar partnership could be
forged for Tyne and Wear, I believe it could be worth up to £20 million for the county
over five years – a substantial sum.”

Email ThisBlogThis!Share to TwitterShare to FacebookShare to Pinterest
Labels: Arriva, buses, Go-Ahead, Stagecoach
Newer Post Older Post Home
The Focus Transport website is intended to appeal to those that have a broad interest in public transport.
We cover topical news items and display high quality photographs relating to the current transport scene and also show archive material from slides and prints that are relevant to the subjects under review.
We publish in-depth articles about transport issues and welcome contributions from anyone who has suitable material.