Virgin Atlantic will launch its first domestic service by flying passengers between London and Manchester, the firm revealed yesterday. 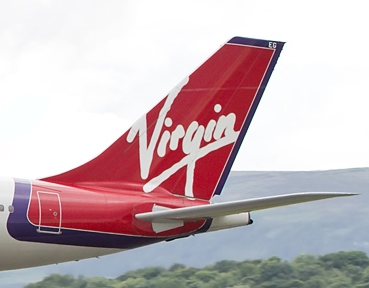 Virgin will operate three daily flights from London Heathrow to Manchester from March 31 next year.
Chief executive Steve Ridgway said the move was in response to the takeover of bmi by British Airways' parent company rather than Virgin Trains' loss of the rail service between the two cities.

Flights between Heathrow and the North West will begin next spring using an Airbus A319 aircraft.
Mr Ridgway said: 'Since bmi was swallowed up by British Airways, the competition that existed on domestic routes and European routes has disappeared. Virgin Atlantic has obviously

provided great competition over the years internationally on the long-haul routes and this is about redressing that as part of the process of making sure that BA doesn't become a monopolist on all the routes bmi used to fly.'
Mr Ridgway insisted that air travel was a 'different market' from rail services between Manchester and London.

'With bmi disappearing off Manchester-London Heathrow, 650,000 passengers from Manchester that fly to Heathrow and then on to the rest of the world, to keep Manchester connected with the rest of the world, only have one choice now and that's why Virgin Atlantic is responding to make sure that competition is preserved,' he told the BBC Radio 4 Today programme.
'There obviously will be some people who are flying direct to London to do business, but this is particularly about keeping Manchester and the North West connected with the rest of the world.'
Virgin already flies from Manchester to Barbados and Las Vegas and to Orlando in Florida.
Manchester Airports Group chief commercial officer Ken O'Toole said today: 'We are pleased to see Virgin Atlantic increasing their presence in Manchester and to see competition returning on the London route, as that will be to the benefit of passengers flying from our airport.'
Tickets for the new London-Manchester service went on sale yesterday.

Email ThisBlogThis!Share to TwitterShare to FacebookShare to Pinterest
Labels: Virgin
Newer Post Older Post Home
The Focus Transport website is intended to appeal to those that have a broad interest in public transport.
We cover topical news items and display high quality photographs relating to the current transport scene and also show archive material from slides and prints that are relevant to the subjects under review.
We publish in-depth articles about transport issues and welcome contributions from anyone who has suitable material.